At the swearing-in ceremony last night, Prime Minister Lee Hsien Loong said, "Politics is not a job or a career promotion. It is a calling to serve the larger good of Singapore. But ministers should also be paid properly in order that Singapore can have a honest, competent leadership over the long term."

Compare that to what he told BBC journalist Jonathan Head in 2009:
"We go on a system which is open, honest, transparent. What is the job worth, what is the quality of person whom you want. You need the best people for the job and these are jobs where you make decisions which are worth billions of dollars. And you cannot do that if you’re pretending and you just say, well, we’re all in it for the love of king and country." 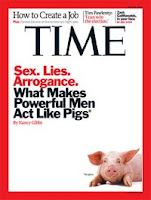 So is the guy suffering from schizophrenia or what? The answer seems to be blazoned on the latest TIME cover, 'What Makes Powerful Men Act Like Pigs." Save for the sex part, "Lies" and "Arrogance" fit the bill perfectly.

It's easy to debunk the "not a career promotion" boast. Just list the take home pay of the cabinet members, before and after being sworn in as ministers. Do a quick check of the ministers who have retired, is Yeo Cheow Tong still in the same income tax bracket? Will George Yeo find a similar paying job in the private sector within the next 6 months? - no cheating here, no GLC linked entities or any of the companies in the stable of Mrs PM Lee.

It is no comfort that Gerard Ee is named to head the committee for the review of ministerial salaries. He is also the Chairman of the despised Public Transport Council (PTC), the implementation tool of the Transport Minister, best exemplified in the 12 September 2006 blanket approval for local transport operators SBS Transit and SMRT to hike bus and train fares by 1.7%. During the run up to the GE 2011, when oil prices rose significantly, PTC was unnaturally quiet about fare hikes. This committee smells a lot like the one Wong Kan Seng created to look into the Mas Selamat escapade.

Ee himself has already set the tone for his task, "Whatever we work out, the final answer must include a substantial discount on comprable salaries in the private sector". These guys are still adamant on private sector pay but without private sector accountability. No wonder, look at what public service pay is like in the rest of the first world countries:
Even if PM Lee takes an immediate 50% pay cut from his S$3.8 million, he will still be the highest paid public office holder on planet earth.
Posted by Tattler at 9:48 AM