This Will Not Wash

PM Lee Hsien Loong was the one who invented the rule. All candidates who are contesting in the General Election are not allowed to campaign on Cooling-off Day, a day before Polling Day 7 May 2011.

PAP candidate Tin Pei Lin said on Thursday May 5, her Facebook page carried a "clarification" on reports that a MacPherson resident had been refused help for her child's tuition fees. A snide comment about her political adversary Nicole Seah on 6 May at around 1.33 pm on her Facebook read:
“OooOoooOooh so that’s what REALLY happened? Wow. I think tears in Parliament is worse than ANYTHING ELSE!”

Quicker than the reaction to Goh Chok Tong's own Facebook post about her "trauma", the comment was taken down after 20 minutes. But not before a netizen beat her to the draw. 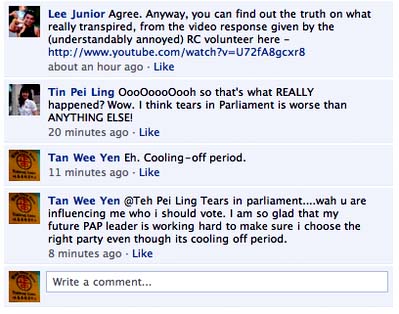 When contacted, Tin told Channel NewsAsia one of her administrators, a Denise He, had mistakenly made the post.
"She wanted to post the comment in her personal capacity, and she was using her mobile phone. But she didn't realise that she had inadvertently posted as my profile rather than her own ... It was an honest mistake," Tin said. Instead of doing her job as official moderator, she had asked her "administrator" to remove the comment immediately. She added that she had earlier given strict instructions to her team of administrators not to make any postings on Cooling-off Day.

When Nicole Seah made an official complaint to the Elections Department, she was told to make a police report before they will take further action. It's good advice. In a court of law, Tin risks persecution for perjury if she sticks to her Kate Spade bag of lies. Any posting from a mobile phone has a unique signature. Unlike a dynamic IP address, the IMEI number is easier to trace. Denise He has to be produced in court. The act of deleting the post is tantamount to tampering with evidence. Finally, her computer or Denise's mobile will yield the tell tale electronic footprints - modern computer forensics is that good.

In the bad old days of parliament, prior to all the reforms alluded to in the GE 2011 election promises, Tin  would simply make a Mas Selamat type apology pioneered by Wong Kan Seng. And the people will be asked to please move on.

On 16 May a member of the public lodged an official police report against Ms Tin Pei Lin, elected Member of Parliament, Marine Parade GRC. Police confirmed they are investigating the offence, which carries a fine or imprisonment or both. 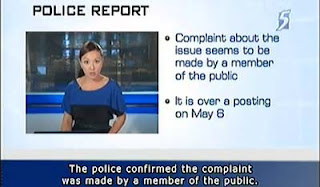 PM Lee made the rules. PM Lee also said at Boat Quay, "if we have to discipline somebody we will do that, and we must learn from the lessons, and never make the same mistake again." The ball is in PM's court.
Posted by Tattler at 12:34 AM