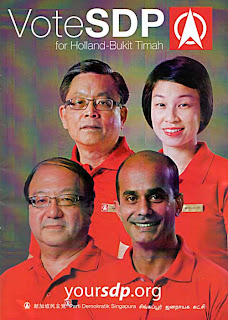 She is the unassuming member of the SDP team for Holland-Bukit Timah GRC. She is the quiet "yin" (阴), while her colleagues are the combative "yang" (阳). Her humble demeanor belies her power resume - graduate of London School of Economics, with working stints in MAS, Salomon Smith Barney Citibank, and Mercer Management Consulting in Hongkong. She turned her back on the greed of the money makers and chose to teach in New Town and Bukit View Secondary Schools.

Her teaching profession comes across clearly in her poised presentation on the podium. In measured tone and language, she delivers her thoroughly researched material on the failings of the incumbents, and outlines the solutions offered by her party. Like Nicole Seah, she speaks from her heart. What you see is what you get. No faked asinine smile that turns into scowl once out of camera range. If you blinked when you watched the concluding seconds of the Boat Quay rally live broadcast, you would have missed the hiss spat at Wong Kan Seng.

Unlike Gomez, she has no axe to grind. Gomez was at the receiving end of the CCTV episode during the last election, forever immortalised in a classic podcast. But that doesn't mean she is any less outraged by the social injustices like $1 extra a day for the destitute (definitely not enough for a meal at hawker center at today's prices), while the bloated elected president is getting $890,700 more for spending money. She highlighted how Vivian Balakrishnan's MCYS expenditure doubled from $898 million in 2006 to $1.8 billion last year - assisted no doubt, by his fiscal exuberance at YOG.

"It is probably the only government ministry whose spending  has increased so quickly and by so much," she told the roaring crowd, who's unabated disgust boiled over at the mention of the hated name. Strange thing is, PM Lee apologized on behalf of Wong Kan Seng (Mas Selamat), Yaacob Ibrahim (Orchard Road floods), Raymond Lim (transport congestion), Mah Bow Tan (housing prices going through the roof), but not Balakrishnan. Was he the one who signed off the $400 million over-budget? No wonder Vivian thinks he's invincible, even with a girly name like that.

When Michelle Lee said, "The Government should answer to us. The old PAP knew this but the new PAP seem to have forgotten who they work for," it was like a listening to our favourite teacher in a classroom (40 to a class, except for GEP students). The lesson is so simple, those who still fail to comprehend should be made to stand in the corner. Better still, get them out of the class altogether, so that we can get on with progress. Majulah Singapura!