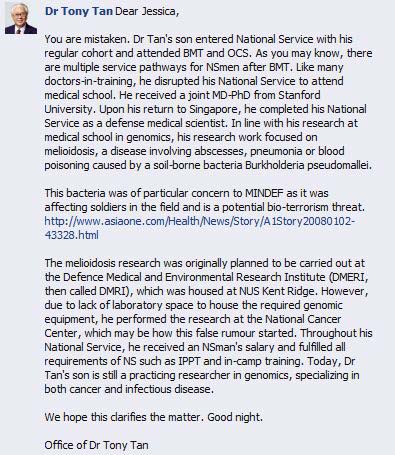 Don't bother to look for the above post in phony Tan's Facebook account. It's gone. Deleted. Disappeared into the twilight zone, dumped into the black hole where the hard truths about Singapore are buried.

Dr Tony Tan righteously claimed, "I regret that, for the first time since this page's inception, I have had to delete a post." He adds, "This page's criteria for civility is not whether the posts are favourable to me. ... I started this page with the intention to create a place of genuine, honest and respectful debate."

Yeah, but not when the debate is about his son's special deal to serve his NS obligation as a "defence research scientist" while lesser mortals end up with less exotic vocations like Combat Medic. Or worse. Puthucheary for one would have loved to learn about this option during the election hustings. His declaration that "I've spent the last 10 years saving kids' lives" in lieu of serving NS would certainly have drawn fewer brickbats from patriotic netizens.

The cowardly deletion, plus phony affirmation of "genuine, honest and respectful debate", is significant. It is concrete evidence that cronyism is rampant in certain quarters. Intent is nine tenths of the law, but the missing bit will always jump up and bite you, more so when the race for $4 million is now on. Revelations like the one below strike a resonant chord with the outraged when we are supposed to be living in a country that subscribes to meritocracy. 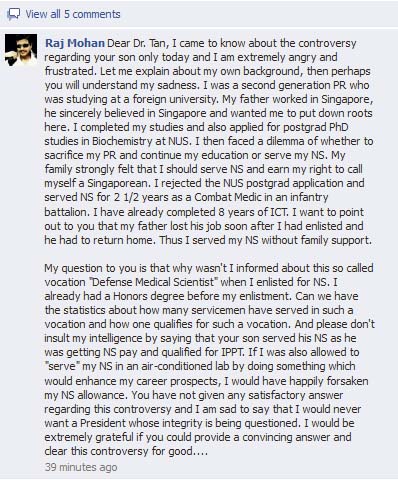