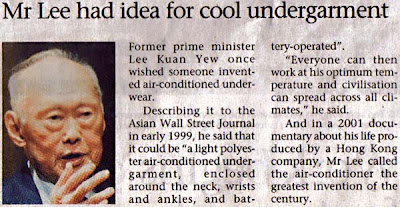 If you want to give a present to a guy who has everything - especially power and money, lots of it - nothing can beat chilled Y-fronts! At the height of his reign, Lee Kuan Yew's office was famous among visitors for its arctic air conditioning (probably will still be, carbon foot print be damned). The room temperature of his office is kept at 22 degrees C, and that of his bedroom at 19 degrees C. Government initiatives encouraging people to reduce usage of air-conditioners or to at least set the air-conditioning temperature to be 25 degrees Celsius or higher obviously do not apply to this energy hog.

According to research by scientists Wyon DP, Andersen I and Lundqvist GR, moderate heat stress is believed to affect mental performance by lowering levels of arousal.  36 male and 36 female 17-year-old subjects were exposed in groups of 4 in a climate chamber to rising air-temperature conditions typical of occupied classrooms, in the range 20--29 degrees C. The maximum rate of rise was 4 degrees C/h. Each group performed mental work during three successive periods of 50 min with 10-min breaks between. During each break the air temperature was reduced by 3 degrees C. Sentence comprehension was significantly reduced by intermediate levels of heat stress in the 3rd hour. A multiplication task was performed significantly more slowly in the heat by male subjects, showing a minimum at 28 degrees C. These findings are consistent with the hypothesis of reduced arousal in moderate heat stress in the absence of conscious effort.

Fortunately, conscious effort can counteract this effect. In most experiments, raised temperatures are perceived at the start by subjects and can act as a stimulus to exert conscious effort. That's reason why Rommel, the Desert Fox, was not encumbered by the soaring temperatures during epic tank battles that knocked out Monty for six. Still, some will argue that Mao, operating from the cooler  climes of his base camp in the Jinggang Mountains, could outwit Chiang Kai Shek sweating it out in the warmer south because of the temperature difference.  Maybe that's why Patrick Tan decided to serve his NS obligation in the National Cancer Center instead of donning Temasek greens in the tropical heat of the training grounds. After after all, his father made such a case about the importance of his research work on melioidosis, also known as "soil disease". To hear from them, MINDEF is so concerned about it affecting soldiers in the field, it is deemed "a potential bio-terrorism threat". Ours must be the first army that will be allergic to dirt on the ground. Recall Tony Tan is the same guy who cut our CPF because he swallowed the PERC findings about Singaporeans being paid more highly than Americans or Australians. Tan should remember that when it comes to the crunch, the rifle is the only real defence from being killed in a war. Throwing test tubes at the enemy won't do much good when push comes to shove.
Posted by Tattler at 10:16 AM