No Country For Old Men 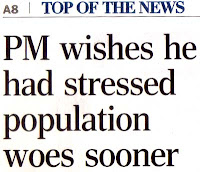 For moment, it read like Prime Minister Lee Hsien Loong finally got the message. In the context of the disruption 117 bus drivers can inflict on our public transportation, anyone else would experience an epiphany of sorts.

Instead, he was was using Bloomberg's editor-in-chief Matthew Winkler to peddle his "population growth is connected to immigration and economic growth" poison. Winkler had asked if there was anything Lee would have done differently since he took charge of the Government in 2004. His answer - should have addressed the ageing population issues earlier. Somehow he missed out on the other developments in the human race. People also get married, have kids, grandchildren, all in the natural order of things. Except when the cycle of life is disrupted by unnatural eugenic theories of social engineering that turn a nation on its head.

First we were told the foreigners were transient workers, they would go home after the infrastructure was built. Unknown to us, foreigners were encouraged to take up citizenships, straining the existing capacities of housing and transportation systems. All too soon, one out of three walking on our streets is an alien face.

Something is more frightening than Singapore turning into "a retirement home and not a vibrant city". The palpable fear is that our birthright, the stake holding in our land which young men in uniform have sworn to protect, is being diluted by the outsiders. The Joel and Ethan Coen movie "No Country For Old Men" must have been made with Singapore in mind.

Putting economic growth ahead of the concerns of the indigenous population could result in a Dubai, where 71% of the population consists of foreigners and expatriates. The expatriate population in the entire UAE makes up 91.5% of the working population. Already Singapore is marketed like Dubai, an exciting destination both for travelers seeking thrills and adventure and for expatriates seeking a healthy employment climate and a tax free lifestyle.

Emigrates in Dubai mostly include Asians, mainly from India, Bangladesh, Pakistan and Filipino. 16% of the population is not being identified either by ethnicity or by nationality but believed to be chiefly Asians. They are not identified by nationals mainly because they live in combined labor accommodation, not unlike the Woodlands Dormitory housing the bus drivers from China. The average age of total Dubai population is about 27 years. Is this what the government has in mind?