Santa Won't Be Liking This

If it's not a white lie, someone is going through extremes to stretch the truth. These guys never get it into their system to call a spade a spade. Flood becomes ponding, strike becomes absence from work without valid medical certificate. 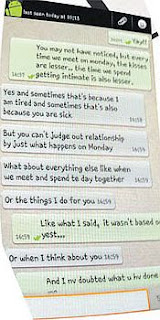 Kids who are holy terrors for the earlier part of the year suddenly become darling angels at Christmas, just in time to be in Santa's good books. Your guess is as good as mine why Deputy Prime Minister Teo Chee Hean chose to say he did not know about the emails and incriminating SMSes that were leaked to The New Paper on Saturday morning. The development which was followed by Laura Ong's resignation on Monday, and the Michael Palmer press conference on Wednesday.

Asked point blank if Palmer mentioned the smoking guns during the meeting with his father confessor, Teo said, "I wasn't aware of that." He declined further comment, adding, "I don't have further details to share with you." When Iswaran clammed up on the F1 sweet heart extension deal with Bernie Ecclestone, at least he had the courtesy to plea confidentiality as an excuse.

So what possibly could Palmer have told Teo as reason to disclose his ongoing sordid affair with the People's Association married employee? That it's open secret the PA is in bed with PAP? That Santa might still let him have the Lamborghini he always wanted if he made a clean breast of things? Needless to say, guys who give their Monday girlfriends lambskin Dior bags have expensive tastes.

PA chief executive director Yam Ah Mee, with his trade mark emotionless monotone, is another not too bothered about the moral lessons to be learned from this shameful episode, "So we want to encourage all to staff to continued to move forward." Looks like the taxpayer sponsored overseas bonding trips will continue.

Some things will have to change. The husband/boyfriend who gave the Marine Parade MP a Kate Spade bag (auctioned off for $1,600) will have to pony up much more for this year's present. That Lady Dior bag, which comes in lambskin, patent leather, ostrich and crocodile hide, could set the poor guy back by $5,500++. Don't forget the hand written note, "To My Darling...Again!"