What lieutenant-general Desmond Kuek plans to do says much about his leadership style. Instead of spearheading the resources at hand in a well staffed SMRT and lead the troubled transportation company out of its own muddied waters, he is bringing in lower ranked soldiers to do the necessary.  One such person is a colonel slotted to the hot seat of director of human resources, whose vaunted experience with handling personnel is being head of national service affairs.

In his "The Godfather" trilogy, Francis Ford Coppola shows how the mafia top dogs buffer themselves with layers of "buttons" or foot soldiers who do the dirty work. Final accountability and responsibility are alien concepts to these guys.

Mark Owen, the former member of the U.S. Naval Special Warfare Development group (a.k.a. SEAL Team Six) who wrote the first hand account of the mission that killed Osama Bin Laden ("No Easy Day"), was shocked to discover that the Al Qaeda leader's AK-47 and Makarov pistol found in his room were not even loaded. He pulled out the magazines and checked the chambers. Both were empty.


"He hadn't even prepared a defense. He had no intention of fighting. He asked his followers for decades to wear suicide vests or fly planes into buildings, but didn't even pick up his weapon. In all of my deployments, we routinely saw this phenomenon.  The higher up the food chain in the targeted individual was, the bigger a pussy he was. The leaders were less willing to fight."
(page 249, "No Easy Day, The Autobiography Of A Navy SEAL")


Former Rear Admiral Lui Tuck Yew does it better. Instead of gearing up to do battle and check out the "deep-seated issues" - such as why SBS can afford to pay its drivers better - he wants to simply pass the cost of the unnecessary overheads to the commuters. Bus driver's wages are just one component in the balance sheet, productivity and efficiency also contribute to the bottom line. But what do these paper generals know? Their table top war games are all about feeding soldiers to the front lines, while the generals primp and mouth fancy speeches.

Singaporeans may not be as emotional as the Hongkong protestors. But they sure do know who the real culprits are. "There is no honor in sending people to die for something you won't even fight for yourself," wrote Mark Owen. 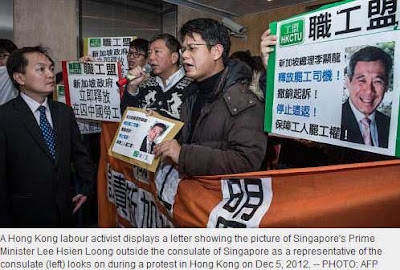