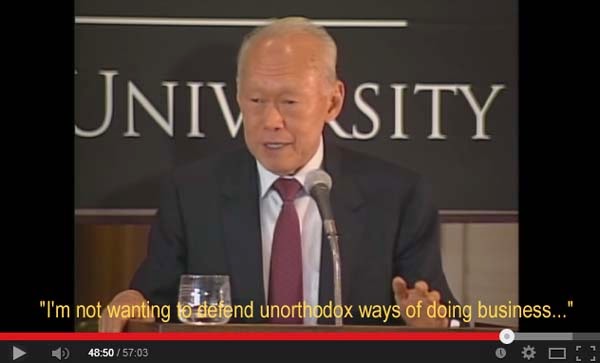 While Brazil has denied links with property firm EcoHouse, a developer who claimed to be working with a Brazilian government social housing programme, it has not refuted reports that GIC Private Limited (formerly known as Government of Singapore Investment) has acquired an 18.5 percent stake in Brazilian education services company Abril Eduacao.

Opaque as ever, GIC did not disclose how much was shelled out for Brazil's primary and secondary school market. Reuters is guessing that the investment is worth about $330 million. How much of that has been tapped from the Central Provident Fund ("GIC pays no regard to what the source of funds is" - Tharman) is more difficult to decipher. We know CPF can be used for our children's education, but spending it on Brazilian kids?

Skip to 49:50 of the video (Lee Kuan Yew speaking in October 1998 at the Shell Distinguished Lecture Series: "The Origin of the Meltdown in East Asia") where he says, "I'm not wanting to defend unorthodox ways of doing business," just after defending Suharto and family for stashing away $42 billion of a nation's wealth. It's okay, he said with a straight face, because Suharto and his family had vested $42 billion and their enterprises in Indonesia, "they didn't put their money outside". 30 years of "corruption, cronyism, bribery and the rest of it" was justifiable in his eyes "because they made growth". What brought the country down was foreign debt, and he blamed IMF for highlighting the financial morass.

We may not have to worry about foreign debt, but the local debt could bring us down to our knees. The composition of government borrowings outstanding as of March 2013 was S$396 billion (comprising T-bills ($60 billion), SGS Bonds ($87 billion) and SSGS ($249 billion)). We now know what SSGS is. We now know where the SSGS ends up. What we don't understand is why they are still saying our CPF is risk free.