You know Minister for Education Heng Swee Keat makes a lousy teacher when he chose to speak on the value of honour for his speech at the launch of a new non-profit organisation, Honour (Singapore), on 5 August 2014. That word is currently a rude reminder that the present government has failed to honour the promise to return the citizens' life savings at age 55. As the late Toh Chin Chye put it, "Mr Speaker, I think fundamental principles are being breached."

Heng should read the Oxford Dictionary example of how to use the word, "I must as a matter of honour avoid any taint of dishonesty". The new organisation he was honouring hardly fits the third aspect he prescribed, "to honour one another by appreciating one another, understanding one another, and respecting differences in views as we build a common future". True, the website of Honour Singapore may profess that it “is a multi-racial, multi-religious, national initiative that seeks to promote a culture of honour and honouring in Singapore in the belief that this is an essential attribute for the continuing peace, progress, and prosperity of Singapore". But what they don't tell you honourably is that its Board of Directors is stacked with leaders from Full Gospel Business (FGB) Singapore.

The mission statements of FGB Singapore aim to, amongst other goals, “multiply disciples and enlarge our reach and spheres of influence” and "establish and advance the Kingdom of God in the marketplace, cities and nation". Something you might easily imagine as being penned by the ISIS (Islamic State of Iraq and Syria). The Executive Director of Honour Singapore, Jason Wong, is also the Chairman of Focus On The Family, a Christian group well-known for adopting an uncompromising stance toward the lesbian, gay, bisexual, and transgender (LGBT) community under the guise of advocating “family values”.

The same Focus On The Family people who were rooting for another group that attempted the surreptitious takeover of the Association of Women for Action and Research (AWARE). In 2009, a clique of conservative bluenoses under the leadership of Josie Lau briefly took over the AWARE executive council on grounds of it allegedly promoting a pro-gay agenda, and was subsequently booted out of office unceremoniously.

The honourable thing to do here is for Jason Wong, Richard Magnus, Georgie Lee, and Khoo Oon Theam to openly declare that they are also leaders of FGB Singapore and Focus On The Family. And explain "enlarge our reach and spheres of influence". To be fair, Zaqy Mohamad (Chua Chu Kang GRC) also tested the tenuous line between state and religious affiliation when he was quoted saying, "Both politically and materially and philosophically, we have been supportive of the Palestine cause and have made that very public." Was that why a Palestinian flag was displayed from a housing board flat instead of our national colours? 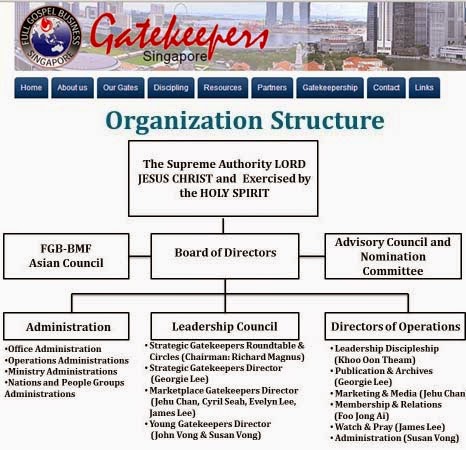