So Much For Transparency 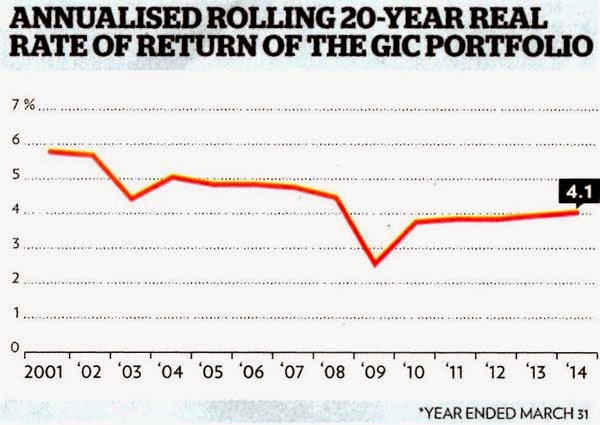 This confirms they don't have a single honest bone in their body. First they tell us that GIC's annualised 20-year REAL rate of return is 4.1 percent. Then, probably realising that the number is none too impressive, group chief investment officer Lim Chow Kiat added that their portfolio also generated a 12.4 percent annualised NOMINAL rate of return for the past 5 years. It's bad enough the chow-kuan Lim chose to compare apples with oranges, the sad fact is that the whole bushel of rotten fruit is just performing to script.

It was only recently that the Republic's sovereign wealth fund manager, with well over S$125 billion under its control, reluctantly admitted that its funds are sourced from current account surpluses, government surpluses AND CPF inflows. What they are still not willing to reveal is exactly how much CPF monies have been stashed in the hush-hush pool. While on the subject of secretive money, do note that those surpluses are the result of the present government being thrifty (planners' view) or plain mean (people's view). Money which should have been allocated for social needs, be it healthcare, public transport or affordable housing for the masses.

Does it help if they add Suppiah Dhanabalan to the board? When he was in charge of DBS, and officers were jumping ship because they were the lowest paid, Dhanabalan gave the lame excuse that DBS was the training school for Singapore's future bankers. The stampede continued unabated, and he had to quietly revise the pay scale to match. And when he killed off POSB, he claimed that the effect of disgruntled customers moving off to other banks was minimal. The reality was that the migration of funds was huge, and he had to quietly bring the POSB name back. To date he is still keeping mum about Ross Worthington's documented account of being slapped in the cabinet meeting room, continuing to "subscribe to the tenet of all secrets staying within the PAP family" (chapter on "The Civil Service and Core Executive Dynamics", page 150,151). The tragedy here is that Dhanabalan is a bible carrying church goer, and he will be carrying secrets to his grave, all for the sake of a seat on the board.