Over The Top Solutions

SingTel chief executive Chua Sock Koong nearly caused an online firestorm on the first morning of the Mobile World Congress 2014 in Barcelona. She was quoted by The Sydney Morning Herald as saying that telcos should be allowed to charge over-the-top (OTT) players for using their networks, "The main problem we have as an industry is we have been unable to monetise this increased demand...and (average revenue per user) has fallen over time." The fury unleashed resulted in Singtel quickly clarifying that it will not charge consumers separately for using services like WhatsApp and Skype. 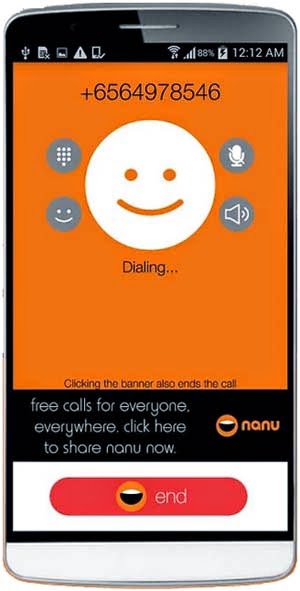 Their revenue model will surely take another hit if Singapore startup Gentay Communications succeeds with their VoIP-based Nanu service, funded by an unnamed Japanese corporate investor and our very own Sim Wong Hoo, CEO of Singapore-based Creative Technology. Father-and-son team, Martin and Daniel Nygate, expanded on what is fundamentally a VoIP technology originally developed to support low bandwidth ship-to-shore voice communications for the maritime industry. With an Android smartphone and access to wifi you can now make free calls to landlines in 41 countries, including the US and the UK, while free calls to mobile phones will work for Germany, Hungary, India, Ireland, Israel, Singapore, Spain, Thailand, and the US. The price you pay is a voiceover advertisement over the ringtone while waiting for a response from the receiving end.

Not bad for an alternative to the automated "operator is busy" message whenever you dial Singtel for assistance. Nanu believes that everyone around the world has the right to make free phone calls and is on a mission to end phone bills once and for all. That must sound Greek to a telcom that charges for telling you the time of the day. Notice that while innovative folks in the private sector contribute to reduce the cost of living, the Very Evil People in the government linked entities connive to make everything more expensive, being it toll charges for using the Causeway or healthcare. Who do you think ends up paying for the special bonus and 10 percent salary increment lined up for the 23,000 voters nurses?