The following excerpt is from the Charlie Rose interview of 28 March 2011:
LKY: “I said in that book (“Hard Truths”) that I think that Malays, that Muslims should be relaxed and eat together with the others.”
CR: “And it created a firestorm and your son said, the Prime Minister, differed with you.”
LKY: “That’s right.”
CR: “So, were you right or your son?”
LKY: *laughs*; “He has to be right because he is the Prime Minister.”
CR: “But … but?”
LKY: “But you ask the average person in the street whether what I’ve said is true.”
CR: “And they would say?”
LKY: “You ask them.”

Charlie Rose would not be able to follow up on that challenge because no details about "the average person in the street" were provided by Lee Kuan Yew. The kind of contact details that Ken Kwek would not divulge when demanded of Lee in the televised dialogue session of 12 April 2006 ("Why My Vote Matters") with a selected panel of young mass communication practitioners below the age of 30. 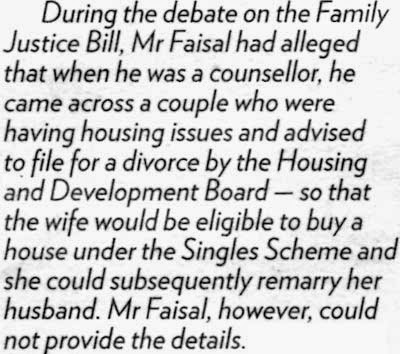 The kind of contact details demanded of Minister of State (National Development) Maliki Osman and Speaker of the House Halimah Yacob when Faisal Abdul Manap narrated the unpalatable encounter of a couple with a Housing Development Board executive. The crux of Faisal's narrative was that a divorce was recommended by the civil serpent servant so that the wife could be eligible to buy a flat under the Singles Scheme. Faisal was accused of making an allegation against HDB ("These are very serious statements that are being made against our civil servants" - Maliki).

Although protected by parliamentary privilege, Faisal chose to apologise as it was not his intention to cast negative aspersions. Faisal explained that, as he was no longer a counsellor, he would not have the contact details of the couple in distress. Part of us suspects he was doing a Ken Kwek. “But you ask the average person in the street whether what I’ve said is true.”