The Scholar System Is Broke 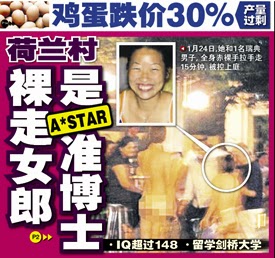 On 24 January 2009 at about 11pm, a scholar gained notoriety by strolling down Lorong Mambong in Holland Village on a crowded Saturday evening with nothing on but her birthday suit.

An alumni of the University of Cambridge at which she studied in 2003, she was sent on an A*STAR National Science Scholarship (NSS) to study infection biology in Sweden's Karolinska Institutet  in 2007. A MENSA member with an IQ of over 148, she was also a champion skater who had represented Singapore at Skate Asia, the largest ice-skating competition outside the US.

Together with Jan Philip, 21, a Swedish student on an exchange programme, the attention getter was charged in court for appearing nude in public. Philip was offered bail of $5,000 and his passport was impounded. But the Singaporean did not have to post bail and her passport was not confiscated. Being a scholar has its privileges.

Despite being fined $2000 for breaking the law, A*Star in its infinite wisdom, chose to give her a warning only, and allowed her to keep the full scholarship. Now in 2014, the streaker makes it plain she is not interested in her bonded employment at all, but is merely marking time to serve out her bond instead of having to face paying, as of 30 September 2014, around $741,657 in order to quit.

Instead of working hard towards a cure for an infectious disease, say Ebola, she decided to go into song and dance and fund art projects "in all genres, including (but) not limited to fine art, visual art, dance, music, circus, theatre, film and literature” with a $1,000 a month grant. Money deducted from a salary that is paid by honest taxpayers, meant to finance a professional obligation she has no intention to fulfil.

The people who vetted and selected her for the umpteen years of expensive overseas education - we assume it must be the Public Service Commission or similar - are caught between a rock and a very hard place. In the private sector, such a maverick will be shown the door in a jiffy - with penalties to match. But to kick her out means admitting they made a bad mistake and committed serious error of judgment. The same judgment with which they have appointed other scholars to high office in various statutory boards and government linked companies, or even into parliament. Come hell or high water, they will never admit the emperor is not wearing any clothes.