Getting Youth To Believe 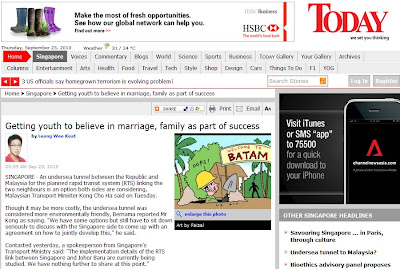 It was a cynical George Bernard Shaw who once said, "Dancing is a vertical expression of a horizontal desire." Thanks to modern human ingenuity, one can skip the supine position to accomplish similar amorous intent, as best illustrated in the library scene of "The Atonement". The alcove of literary resources is not only a refuge for heavy reading, but also of heavy breathing.

Young couples looking to government resources for guidance in matrimonial issues, were surprised to read that their plans for "Getting youth to believe in marriage, family as part of success" turn out to be building an underground tunnel linking Malaysia and Singapore. How did the Ministry of Transport end up being involved in the promotion of matters of the heart, marriage (to qualify for a HDB flat) and procreation (improve birth rate to stem the tide of immigration)?

Perhaps they were planning a tunnel of love, complete with floating ERP gantries. Imaginative NS boys are saying that they will probably be more like the tunnels discovered at the South Korean end of the DMZ, large enough for one regiment to pass through in one hour. Maybe even larger, for 55 tonne 2A4 Leopard tanks too heavy to rumble across overhead bridges, S-shaped or straight thoroughfares. Whatever the rationale of the scholar planners, it's not exactly the accouterment of choice that Cupid could work with.

The hurdles for today's youngsters contemplating a new home are staggering. Some say guys maintain that the COE must come first, before the down payment for an affordable HDB flat, if they can find one. With the coming of the baby, there's the worry of pre-school expenditure, as kindergartens cost more than primary or secondary school fees. Latter may range from $28 per month (inclusive miscellaneous fees) to the $400 charged by independent junior colleges. And with limited places in the local universities taken up by outsiders, parents may have to resort to downgrading their pigeon holes to pay for the overseas degree. In the light of all these financial considerations, maybe a Singapore variant of the prenuptial agreement should be drawn up, with an addendum to to ensure that doting parents don't end up destitute and dumped by their offspring in a nursing home in Johore or Batam. Surely those bureaucratic pen pushers can handle the paperwork.
Posted by Tattler at 10:17 AM