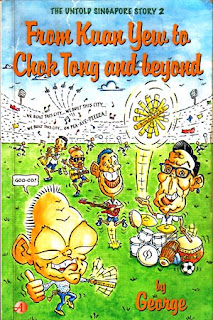 At Hainan, Senior Minister Goh Chok Tong was asked by China's CCTV if he had inherited his legacy from his predecessor Lee Kuan Yew, just as Prime Minister Lee Hsien Loong inherited his. Goh Chok Tong said LKY never talked about his legacy and "I never talk about my legacy". But his own goal, when he took over as PM in 1990, was "to keep Singapore going and going". Well, people like Seet Ai Mee may remember differently: "He scored his own goal".

On the eve of announcement of the Polling Day, Goh declared "Ground may not be sweet for GE". In a nutshell he admitted that the government has failed to address the rising cost of living, despite all the talk about keeping the Singapore dollar high to fight off imported inflation.

He even criticised his own party's manifesto unveiled on Sunday, which was painted with such broad strokes that it spelled out no clear solutions for our country's ills. "I frankly would like an elaboration on the challenges facing Singapore, because I do believe we are going into a period of uncertainties." He was quick to highlight that the manifesto, the strategy, the new media campaign, messages "are all done by PM and his team," neatly absolving himself responsibility for the end result.

He washed his hands again in saying that the choice of PAP's "rather lightweight character" (his descriptive) was due to the "process the ruling party employs in selecting candidates." Summing up his assessment, Goh said "Will she be an asset or liability? I won't know until the results are out." Not exactly the ringing endorsement you expect from the leader of the GRC team she's being field in. Worse, he claims "the opposition is going to find the weakest link". Netizens may have critiqued her fashion fetishes, but they never stooped to call her weak.

On the issue of importing foreign talent, Goh confirmed how the policy was kept secret from the public, "So this trade-off (number of foreigners versus Singaporeans being squeezed out of good jobs) is made, but people won't know." Goh also said the Government allowed the Singapore dollar to strengthen, "despite knowing full well that it would affect the country's export industries and growth." Enough already, which side is he on anyway?
Posted by Tattler at 8:02 AM