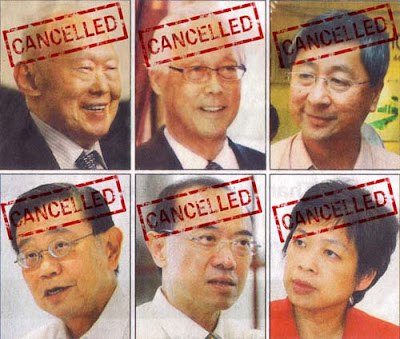 When the boss asks you to surrender the key to the executive toilet, you have to be real daft not to get the hint. The euphemism used for Lee Kuan Yew was "to facilitate leadership renewal in the party", a tad prettier than the "make room for personal priorities" excuse for Hsieh Fu Hua's departure as President of Temasek Holdings. Hsieh, rumoured to succeed PM Lee's wife as chief honcho, was in office for only 17 months. Lee has been at the Central Executive Committee for donkey years.

Also stepping down from the PAP CEC are Goh Chok Tong, Lim Boon Heng, Wong Kan Seng, George Yeo and Lim Hwee Hua. Former Potong Pasir MP Chiam See commented, "These are all very senior ministers who are stepping down. This marks the end of the Lee Kuan Yew era." Well, not exactly.  The lady has yet to collect her CPF. Lim Hwee Hua slided into Parliament via the Marine Parade GRC route in 1997 and joined the CEC in 2003. She was obviously the collateral damage for George Yeo's Waterloo at Aljunied. Lim become woman minister on 1 April 2009, when she was made Minister in the Prime Minister’s Office and Second Minister for Finance and Second Minister for Transport. Lim is not the first woman minister to be booted out by the electorate. That dubious honour goes to Dr. Seet Ai Mee, Minister of State at the Ministry of Education and Ministry of Community Development, who was defeated by Ling How Doong at the 1991 polls. Some said she was brought down by the handshake with a fishmonger. Dr Seet said it was a pork seller. Whatever.

No tears will be shed for Lim Boon Heng (the original cry baby), Wong Kan Seng, Goh Chok Tong or George Yeo. Lim Kim San once told a young banker during a moment of candour, "One thing about the PAP, they take care of their own. If not for them, I'll be sleeping on the streets."

But who's taking care of the people of Singapore? Among the names tossed up to fill the vacancies, one of them is none other than the "kee chiu" general Chan Chun Seng. Yup, the guy who said our country won't last longer than the Lanfang Republic ("states of Singapore’s size rarely survived beyond 100 years"). Which means those who signed up for the overpriced HDB BTO flats might never get to see the end of the 99-year lease. Which way to the exit door?
Posted by Tattler at 9:54 AM