Hang On To Your Day Job 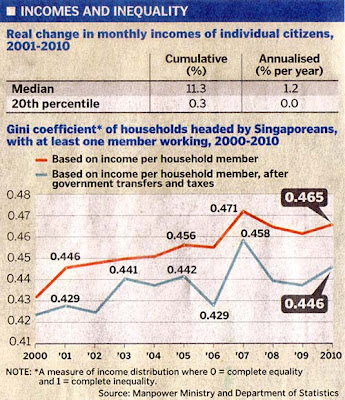 True to his plans, Ministry of Manpower (MOM) data released yesterday showed that while middle incomes rose more than 10 percent over the past decade, the bottom feeders at the 20 percentile stagnated. Even the statisticians had to admit the Gini coefficient was "high", comparable to Hong Kong, New York and Los Angeles, cities which attract movie stars and other high flyers. But don't blame Gong Li or Jet Li (no relation) for picking up a red passport, focus instead on the multi-farious government promises that were supposed to help the poor. As in the President's pledge to "seek high quality, inclusive growth that benefits all citizens, not just the lucky few". Lee didn't even bother to attend the opening of parliament to hear that line, he's off on another high flying junket to receive some legacy award. Lucky him. Doubtless, Abe Lincoln must be rolling in his grave.

On the jobs front, although unemployment rate was at 3.1 percent, jobless Singaporeans aged 50 and above stayed unemployed for longer periods - 12 weeks, compared to the average 8 weeks for all citizens. The MOM report said they were too discouraged to pound the pavement on another futile job search.

Ex-minister George Yeo, 57, unemployed since May 2011, should be delirious and jumping up and down like Tom Cruise did on Oprah's sofa. He just beat the odds and landed a Senior Advisor appointment with Malaysian conglomerate Kuok Brothers. Strange enough, he's not popping the champagne bottle yet, but played it down as "an informal arrangement." As in guanxi, the Chinese euphemism for quid pro quo. He said, "I'll join private sector next year. Not decided yet what or where." Which is curious, considering that the Kuok Group, run by "sugar king" Robert Kuok, dealing in chemical, scrap steel and fertilisers, is as private sector as they come. Unless they have plans for government projects, and Yeo is fearful of compromising his Official Secrets Act obligations. The guy was minister for information and the arts, health, trade and industry, and foreign affairs - surely he must be good for something. Unless it was pure wayang all along.
Posted by Tattler at 8:56 AM