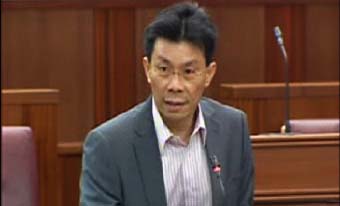 With his tousled hair, the questioner looked like a Rip Van Winkle who was rudely interrupted from his long siesta to do some productive work. Rising just in time to catch the tail end of Low Thia Khiang's speech, he asked: "My question is, in what way does he think the field is not level for the opposition party?"

Mr Low made it easy enough for a 4-year-old to understand, "To cut it short, simply put it, that the GRC system is something which has not given the opposition a level playing field." One member sitting directly behind Low was visibly trying to stifle his snicker. Man, how long has the guy been sleeping?

By now, every kid in a Singapore school knows what gerrymander is. It is the root cause why you get to see your MP only once a year. Why should he or she bother to visit the constituents if the electoral boundaries are re-drawn every time before a general election is conducted? Why risk a health hazard by shaking hands with a fishmonger or pork seller (depending on the story telling) when one could be clinking champagne glasses at a "good class bungalow" ward?

It was the nineteen-century Governor of Massachusetts, Elbridge Gerry, who has given his name to a practice that undermines democracy. He is said to have drawn up a district map of the United States. A cartoonist then satirized the shape of one electoral region by adding a head, wings, and claws and declaring, 'That will do for a salamander.' Another retorted, 'Gerrymander'. Thus a word was born that refers to a practice of manipulating electoral districts unfairly in order to secure disproportionate representation. ("Dining With Terrorists", Phil Rees, Pan Macmillan 2005, page 187).

It may be argued that even with the advantages of carving up the country to give one political party a majority in many districts while concentrating the voting strength of the other party into as few districts as possible, a SMC candidate still has to put in some token effort as some core residents may not have been afftected by the geographical redistribution. Not so the GRC guy. The chap who was introduced with much pomp and ceremony in one constituency can end up parachuting into another kilometers away in a wink of an eye. And guaranteed a ride into parliament. Such is the level playing field in local politics.
Posted by Tattler at 8:59 AM