Our Very Own Zapruder Clip

November 22 is just round the corner, boon time for "Who Killed JKF" fans to rehash conspiracy theories. Vincent Bugliosi's 1,632 page "Reclaiming History: The Assassination of President John F Kennedy" is the definitive volume to consult. Especially the details about the 26.6 second Zapruder film sequence shot by private citizen Abraham Zapruder with a home-movie camera. We have a grassy knoll too, ours is at the Hong Lim Green.

The Zapruder clip was an important part of the Warren Commission hearings and all subsequent investigations of the assassination, and is one of the most studied pieces of film in history. The 68 seconds captured on Saturday 27 may earn its place in our own history, it also deserves close scrutiny. 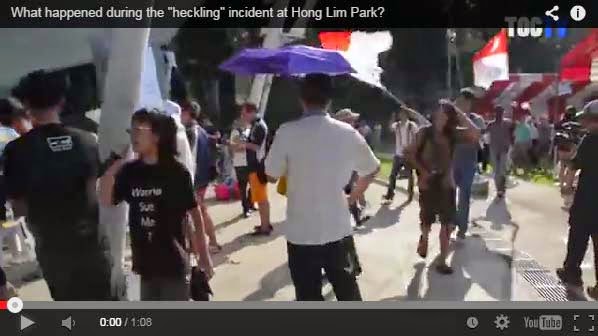 0:00/1:08: There's no time stamp, so we don't know when the march actually started but the EXIF metadata should still be available, embedded in the original video file. The gem of an idea for the walkabout must be traceable to one man's boast from the past, "People support CPF cuts because there are no protest (sic) outside parliament." 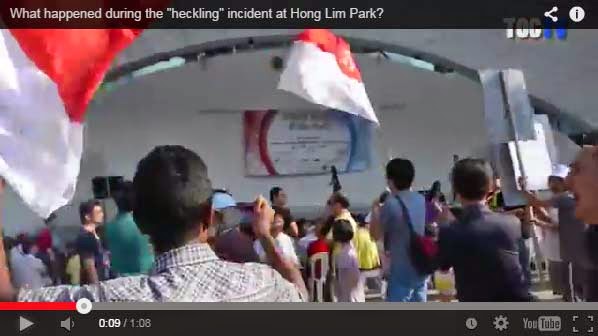 0:09/1:08: The marchers stop in front of an empty stage. Only one female is sighted, and she does not look, or move, like a Special Needs Child (SNC). A break in the event program begging to be filled. 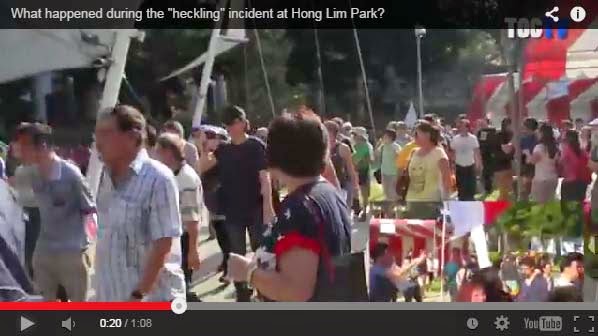 0:20/1.08: This is the crucial start of the "heckle" video. The patriotic flag waving and the boisterous chant of "Return our CPF" dominate, and builds to a crescendo. 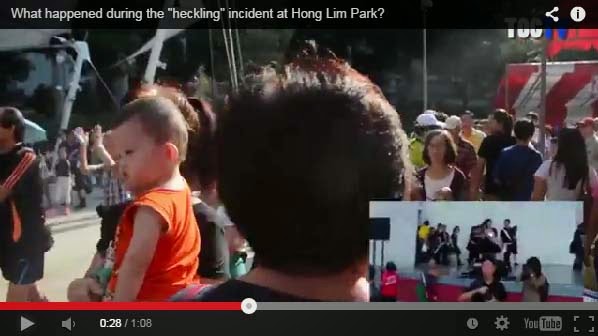 0:28/1.08: Watch the yellow T-shirt guy hustling the SNCs on stage, and exposing the vulnerable kids to the gathered crowd. He could have done better, choose instead to keep them off stage until the marchers have moved on, and save the SNCs from the NAR-rated spectacle. But E.Q. was never their strong point. Then again, he could have been performing to script. Nope, the cute baby can't be the traumatised kid Teo Ser Luck told the Straits Times about. 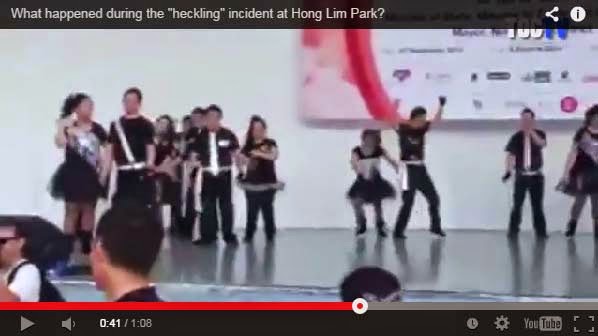 0:41/1:08: The SNCs get into the swing of their dance routine. Note the John Travolta wannabe waving his arms like it was Saturday Night Fever. His dance partner is jiving away happily, trying to keep pace with his vigorous lead. Still no sign of the traumatised kid. MP Teo really lucked out this time, he should be made to take a polygraph test. Maybe he was the kid who needed to be consoled, after one white haired senior citizen sat down next to him on the lawn, and gave him some fatherly advice, "limpeh kah loo kong, hor....." 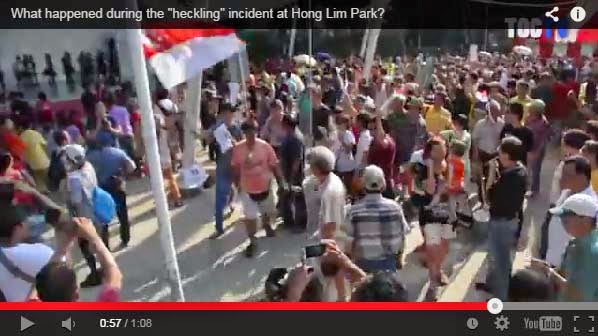 0:57/1:08: This is it, this must be the epiphany. Suddenly all the pieces of the puzzle fall into place. Why the YMCA event was rescheduled to start later (from 10am to 4pm). Why the NParks director insisted the protest be limited to an obscure corner (the "grassy knoll"). Why the nameless mata-mata made a veiled threat about maintaining the peace. Why the YMCA Master of Ceremonies urged his supporters to taunt, "We love our CPF" - Yang Yin's "Come on, money, I love you" (来吧，钱，我爱你！) would not be out of place here. Why the SNCs are fronted on stage as Human Shields. That's when the marchers wisely moved on, before the rubber bullets are let fly and tear gas canisters lobbed.

Do we really care who shot JFK? Not really, all we are looking forward to is just desserts for Yang Yin and his foreign talent kind. And a good explanation why the Office of the Public Guardian (OPG) is now turning on an 87 year old Singaporean and acting in favour of the tour guide from China. Why question Madam Chung's mental capacity to revoke the Lasting Power of Attorney? But that's another conspiracy theory in the making.