Sex helps sell publications (amongst other things). That was why maiden issues of The New Paper (a.k.a. The Nude Paper) featured scandalous stories and scantily clad females. It was supposed to target the blue collared workers who can't understand the high falutin words used by some politicians quoted in the morning rag.

Biased journalism has similar effect on sales. Fans of the embattled Dr Ong Teck Chin must be ringing up the paper for reprints of the movie star quality shots used for Sunday's front page and accompanying feature article. In real person, he definitely looks more effeminate than Mel Gibson in Braveheart. The sympathy being garnered for Ong reminds one of the Straits Times front page letter Ho Ching wrote in support of TT Durai before latter was pulverised by Davinder Singh. Ms Ho was reminding the public of Durai's contributions, basically amounting to raising lots of money with contrived tear jerking stories. The part about enhancing his own lifestyle came out only later in court. They talked about "the legacy" of Dr Ong in the papers, and how he raised the ranking of the school under his charge with "concentration camp" techniques. No further details were given about his well known favoritism for certain categories of teaching staff. If they are serious about newspaper sales, they need to dig up more juicy material.

But sex and biased journalism were not used for Saturday's front page story of TNP. Someone said confidential information was procured for a smear campaign. Never mind the story was full of holes, the facts mangled beyond recognition, and the picture of Lee Bee Wah was never printed on a toilet cover. Actually there are lots of upmarket toilet covers with more attractive illustrations than an old bat. So is the journalist from TNP, Ms Ng Wan Ching, breaking new ground by using fiction to boost circulation? Or is someone trying to lure the writers of the targetted website out of anonymity by dangling a juicy defamation suit? TT Durai took that bait, and look what happened to him. 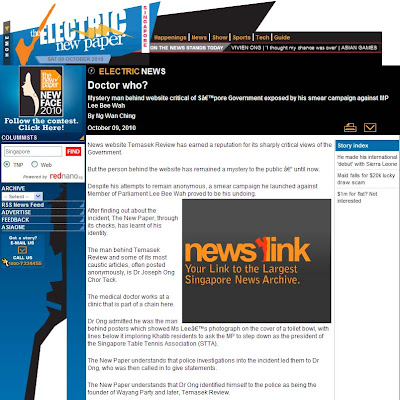