The Laju Screw Up

You've heard of the notorious ISD, there was also the SID. Then S. R. Nathan was Director of Security and Intelligence at the Ministry of Defence. This little nugget doesn't get much airing in the mainstream media.

On 31 Jan 1974, the Shell Oil Refinery on Pulau Bukom was attacked by four terrorists, 2 from the Japanese Red Army (JRA) and 2 from the Popular Front for the Liberation of Palestine (PFLP). Thereafter they hijacked the ferryboat "Laju" and held the crew as hostage.

Japananese ambassador Uomoto met with Lee Kuan Yew and cabinet acceded to the demands - safe passage, two hostages, and exit flight to an Arab country. A wrangle arose between the Japanese and Singapore Government concerning who should provide the plane. Spokesman Tay Seow Hua, Permanent Secretary to the Home Affairs Ministry, laughed when asked why SIA could not help, "Why? Why can't any airline do it? Because no man likes to have armed men on board." Japan Air Line officials agreed to send a DC-8 only if both Governments guaranteed the safety of the crew and the aircraft. The party of guarantors would include S.R. Nathan, director of SID, and a 12-men-team (4 SAF Commandos plus 8 government officials).

Through the Singapore government, the hijackers had sought the help of the North Korean government to escape to any Arab country - except Damascus, Baghdad and Aden. However, Singapore's consultations with North Korea led to nowhere. The acting North Korean Consul General, Mr Pak Gil Yon, said: "I am not in a position to say anything on this matter." Yet the plane departed despite urgent but fruitless consultations with North Korea via a special "hotline" to Pyongyang. (ST, 9 Feb 1974)

With 15 minutes of fuel left, they discovered they could not land in Kuwait - Baghdad had refused permission. Writing in "The Little Red Dot," a compilation of essays by Singapore diplomats by Tommy Koh and Chang Li Lin, Nathan admits he lied to the Control Tower he was a special emissary of the Prime Minister of Singapore ("which I had no prior authority to say", page 22) and avoided mention there were four hijackers on board. The Kuwaiti Defence Minister who met him on the tarmac was none too pleased. Negotiations then proceeded with the Minister, the Japanese ambassador from Teheran and a PLO representative from Baghdad, leaving Nathan out in the cold. Nathan tried to reason with the hijackers to let him leave and fly back to Singapore. Finally the Foreign Minister of Kuwait came, and met with the hijackers. Nathan said his words were that "we get lost" until their flight out that evening.

Reflecting on the cock-up at the Kuwaiti airport, Nathan's last words were on the need for close co-ordination and follow up by different branches of the Government. Salaries for civil servants have increased astronomically since 1974, but some things just don't change. 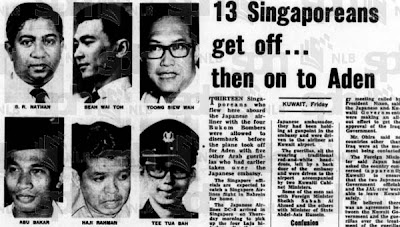