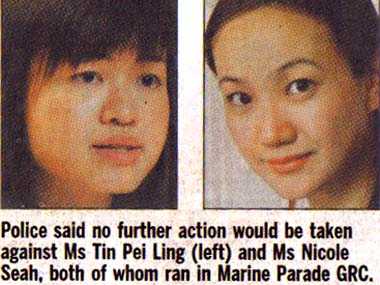 Wait a minute, who's under investigation here? The caption implies that the Parliamentary Elections Act was breached not only by Marine Parade MP Tin Pei Ling, but also by her target of abuse. Is the police even acting on the report filed?

It is now abundantly clear why the Singapore Police Force took so long to come to a conclusion about the "Wow, I think tears in parliament is worse than ANYTHING ELSE!" post on the Kate Spade MP's Facebook page. They were going over Nicole Seah's own Facebook account with an electron microscope to dig up anything, anything at all, remotely incriminating. This must be the first time anyone comes across their "smoking gun": that "Scrutinise the PAP manifesto one more time! Cooling off period starts now!" comment. You got to have an IQ less than 75 to deem that "election advertising". It sounds more like a public service announcement. Maybe the cops took it that the mere mention of "Cooling off period" is grounds for prosecution. Perhaps a scrutiny of the police report about this particular post may be more enlightening? If one exists at all?

So Denise He exists, it wasn't a figment of Ms Tin's tinsel imagination, or so we are told. So why not let us see her ugly mugshot? After all, they simply took Tin's word for the gospel truth. They quoted no proof in the electronic signatures, in the mobile phone record (from which the offending post was supposedly made) or in the log of the Facebook account. One doubts if any cyber forensic investigation was done at all.

The whole charade reminds one of the Chan Sek Keong ruling about Goh Chok Tong and company not breaching any election law by being inside the Cheng San polling area, but not within 200 meters of it. But does the bo-chap PM care? He didn't even bother to speak to the people live for the National Day message. Instead, he pre-recorded it one-week in advance. Now wonder it sounded so hollow, so unreal, so utterly disconnected with the turmoil that saw STI tumbling by 110.78 points and $18 billion wiped off the 30 blue chip components stocks. With such blinkers on, no wonder he is deaf to the protestation about the SMRT fare hike. Come next year, we may see a body double showing up for at the parade. Why even bother?
Posted by Tattler at 9:21 AM