Or is it the Richard Nixon defence? Tricky Dicky made Haldeman and Erlichman take the fall for paying the hush money to the Watergate burglars through Colson. Was "Denise He" the sacrificial pawn for the MarineParadeGate cover up, and was any MP allowance used as hush fund? Whoa! We don't want to go there! And if we do go that route, the CPID would have to be called in, not just the Elections Department. The British police can also help by teaching the daft SPF how to use the hard coded IMEI numbers to track down the real culprit, the way they caught the looters in London. Would "Denise He" still be prepared to serve jail time like Colson? 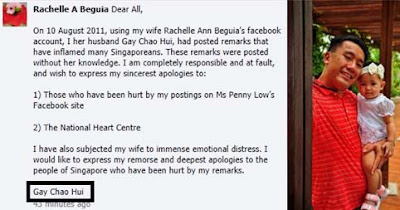 No less dramatic, Joachim Gay Chao Hui has come forth to be the sacrificial lamb for his filipino wife, claiming it was he who posted the derogatory remarks under the name of Rachelle Ann Beguia. Viva la romance! Such gallantry, truly rare in today's modern age. Rarer still in the species which was recently labelled by the tutor at Tampines Junior College as "moronic", with questionable codes of "loyalty" and "patriotism". This is a guy who took the MIW's advice to heart to embrace the foreigners - maybe too literally - and even produced a cute little tyke to address the nation's declining birthrate. From the break in his scholastic resume, between 1995-1996 (NJC) and 1999-2000 (NUS), one assumes Gay did fulfil his NS obligations. Or he was training with the Moro Islamic Liberation Front in Zamboanga, Philippines. Latter is not so far fetched when you read some of his milder postings:


"Singaporeans are the ugliest human species ever to graze God’s green earth…..really. I am a Singaporean myself but I am an exception. Everyone I see on the streets of Singapore are so damn ugly and out of shape!!"

“Those of you who had viewed the Miss Singapore Universe competition on television who have been amazed…. yes, amazed by the depressing standards of the contest. All the contestants look so……. ‘deformed’ and the eventual winner Jessica Tan looks like my autistic friend.”

“I am Chinese Singaporean but I despise Chinese Singaporeans the most….really KIASU and a bunch of maid abuses. Hail the Filipinos screw all you SINGAPOREANS! From what you described, as a Singaporean (am very embarassed to be one and have disavowed any association with this nationality).”

During the 2001 invasion of Afghanistan, US Marines were shocked to come across John Phillip Walker Lindh as an enemy combatant on the Taliban side. Born in Washington and raised a Catholic, Lindh was captured by Afghan Northern Alliance forces after his Al-Qaeda foreign fighters unit surrendered at Kunduz. Do we have a similar Benedict Arnold in our ranks? If we do, blame it on the "kee chiu" generals who can't tell where their men are pointing the SARs. Hey, we even have elected MPs who don't give a hoot about the national anthem. Soon, we will be finding out if the National Heart Center has been compromised too.
Posted by Tattler at 9:35 PM