Shrewd Observation By A Filipina 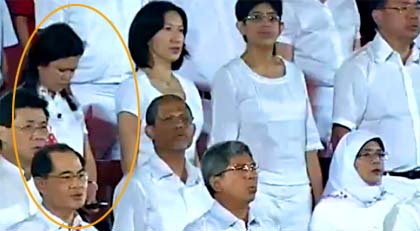 For reasons best known to her, filipina Rachelle Ann Beguia Riko put in her two centavos' worth to lend support to the beleaguered MP for Pasir Ris-Punggol GRC, Penny Low, of Malaysia origin. Ms Low was seen on national television totally engrossed with her mobile phone while loyal Singaporeans were solemnly singing the national anthem. Low has apologised, saying she was carried away with "sharing that moment of pride" on Facebook with her residents.

The filipina's post may be disturbing, and some may conclude her diatribe is downright divisive:


“These moronic ‘Singaporeans’, their code, their morals, their ‘loyalty’ and ‘patriotism’… all dropped at the first sign of trouble… just ask any of them if they want to be excused from serving NS and they will be the first to raise their hands… Require any of them to serve an extra month of NS and they will riot in Singapore… Ask them to fight a war, almost all will declare they are ready to pack up and run."

"… But when foreigners like Bangladeshi, Thais and Indians come and provide labour for building flats and roads, you didn’t seem to have complained about it…. if tomorrow the government decides to hire foreigners to become soldiers and no more serving of NS for all men let’s see if you will make the same comment… By the way, if foreigners can come and snatch your jobs and flats it only shows one thing…. how incompetent you are."

For a newcomer Rachelle has pretty strong opinions about the natives. She got that part about NS right - who wants to defend the country if 1/3 has been handed over to aliens like her on a silver platter? But she fingered the wrong incompetent party. A competent government would have ejected mercenary misfits like her at the port of entry. Rachalle said of herself, "yes I like to bootlick it benefits me what are you going to do about it?" The "population czar" who made entry for a clerk like her so easy has already been kicked out of office. More should be following his exit route - those allowing them to snatch away jobs and flats - unless they plan to populate the country only with bootlickers and sycophants. Fortunately for Rachelle, Singaporeans are not a vengeful people, we just aspire for wisdom of true leaders like Abraham Lincoln to prevail,

"We are not enemies, but friends.
We must not be enemies.
Though passion may have strained,
it must not break our bonds of affection."
Posted by Tattler at 9:42 AM