Even when he was handling out the Kool-aid - such as the graduate mother policy - his father used to do it with panache. Who can forget the gee-whiz graphs, the tables of statistics, the powerpoint slides. Critic or supporter, each one in the audience would have carried away an indelible imprint of the message's keynote. In contrast, last night's messenger fired lots of rounds but none seem to hit the target. Just like the time he embarrassed himself on the Brunei range in 1987, when  the prime minister had scored direct hits with the weapons whereas his soldier-son had "washouts" (page 117, Seow, F. (1998), "The Media Enthralled: Singapore revisited") 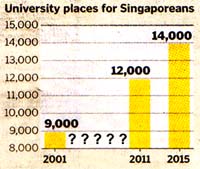 The one graph he did show is a real downer. University places for Singaporeans increased from 9,000 in 2001 to 12,000 in 2011. That's 3,000 in a decade. He promised to bump the number up to 14,000 by 2015. That's 2,000 more in 4 years' time. At least we have a set goal to measure his performance. Problem is, a huge 18% of the cohort is set aside for foreigners. Assuming the 12,000 is all Singaporean, PRs excluded, and constitutes 82 percent of the pie, the foreign student population is about 2,600. Why not half the alien enrolment now and do away with the wait for 2015? Does he even know how many families have had to sell their houses to finance an overseas education because places at home are taken away by outsiders? Notice the numbers for 2002 through 2010 are missing. Surely the universities have the data, what is the guy hiding? That progress for Singaporeans comes about only when the opposition dig a spur into their hides?

Let us see empirical confirmation of how foreign students contribute to the nation. Who will you be proud of most, a startup comprised of all Singaporeans, or two fifths diluted by foreign content? Surely he must have gotten the message by now, no one roots for the ping pong players because the team members are China's leftovers.

While reiterating a "Singaporean First " approach, he conveniently avoided mention of a President Scholarship recently awarded to a dual citizenship holder. Meanwhile Singaporean males are deemed flight risks, and have to post a hefty bond before heading for Changi airport.

The ISD plant in the mainstream media, namely Chua Mui Hoong, found the tone of the National Day Rally speech too conciliatory. Her younger colleague went further to deem it condescending. Showing video clips of a Transformer Bumblebee instead of the BBC footage of fiery London says it all - the driver definitely needs to wake up. BTW his excuse for the bad marksmanship at Burnei was he had "tried for a more difficult target behind the target in question."
Posted by Tattler at 8:59 AM