Lee Kuan Yew's election rallies [of the 80s] at Fullerton Square were legendary. He and his audience braved downpours during the rallies, when he would speak, off the cuff, for hours, spelling out his hopes, fears, and dreams for the country. (LKY: The Man And His Ideas, page 143) 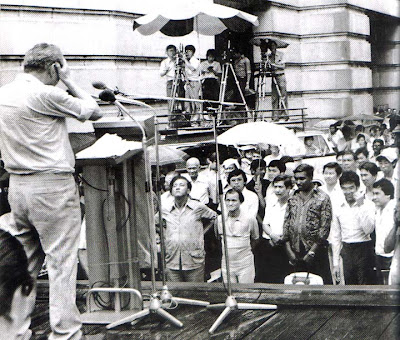 How times have changed. A new generation of political leaders braved the rain at the Hougang field facing Block 837 on 22 May 2012. Their supporters were not deterred by the downpour, taking in the speeches with the showers from the heavens, with strangers sharing their umbrellas or makeshift rain coats. 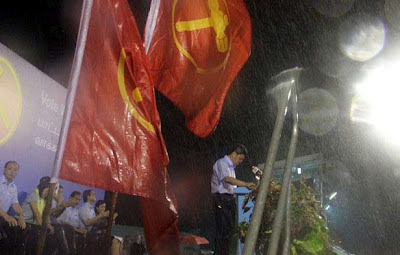 But where are Lee's modern day storm troopers? After one pathetic rally on Sunday, they retreated to the mainstream media, taking potshots ad nauseam like Wong Kan Seng did at the integrity of James Gomez over the filing of his minority candidate papers at GE 2006. Which provided inspiration for the brilliant persistently non-political podcast no. 6 of Mr Brown, same guy Denise Phua credited for a check on the government. DPM Teo Chee Hean should pay heed to what the younger Lee used to say in 1956 about steering the press:


"If we attempt to use the whole machinery of state, while we are in office, to bias things our way, then we cannot complain when somebody else, after assuming office, does exactly the same to us." - Hansard, 5 Sept 1956