The man joining the gathered crowd was fuming mad, spewing colourful expletives that would make a seafarer blush. He was telling everybody who cared to hear how low the creeps could stoop to fix the opposition. 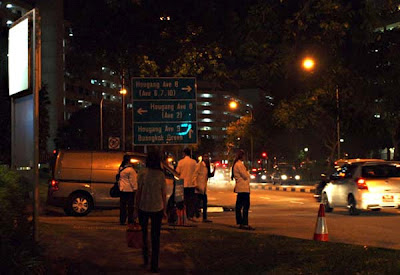 He had already made an effort to park a distance away from the Hougang rally grounds to avoid jamming the carparks, and inconveniencing the nearby residents. On Saturday he had found the carpark at Block 601 was not too full, and not too far to walk from. This night he was stopped by a large group of car park attendants, refusing entrance except to those with seasonal passes. When told it was because of the rally, he demanded to know why it wasn't cordoned off on Saturday 19th at the same hour he had arrived at the same car park. Confronting the supervisor in charge, he was told they were under instructions from the HDB. Thoroughly cheesed off, he had to move off to another carpark at Block 611, some 600 meters away. Straight away, we were reminded of the story Sylvia Lim told about the stoicism of her secretary: "Never mind - if we have no train, we will take bus! If we have no bus, we can walk!"

After the rally, a few friends walked to Block 601 to confirm the guy's story. Sure enough, the parking aunties were there in force, flashing the parking ticket dispenser like a threatening taser. They also found the carpark at Block 611 added to the cordon. Apparently, as the crowd grew, more car park attendants were mobilised  to increase the no-parking zone. At taxpayers' expense, of course. But did it deter the supporters from joining the rally? See for yourself. 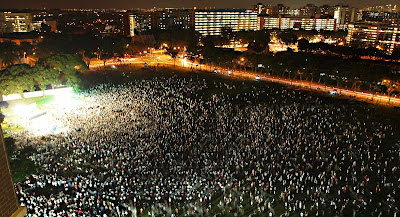