What is tuberculosis?
Tuberculosis is a contagious bacterial infection usually affecting the lungs (pulmonary TB), but may spread to other organs like lymph nodes, kidneys, bones, joints, etc. (extrapulmonary TB).

What are the symptoms of tuberculosis?
The symptoms of TB include a low-grade fever, night sweats, fatigue, weight loss and a persistent cough. Some people may not have obvious symptoms.

Who gets tuberculosis?
Tuberculosis can affect anyone of any age. People with weakened immune systems are at increased risk, for example due to chemotherapy, diabetes, or certain medications.

How is tuberculosis spread?
Tuberculosis is spread when a person with untreated pulmonary TB coughs or sneezes, releasing microscopic droplets of bacteria into the air. Prolonged exposure to a person with untreated TB is necessary for infection to occur, such as someone you live with or work with. Forced proximity in a congested public transportation cabin is not helpful.

What are the experts saying?
It is clear that TB control in Singapore is now at a cross road; additional measures and resources are critically needed to battle this disease. Pivotal to this is to acknowledge and address TB in foreigners and its impact on the local population.
Between 2004 and 2010, the population increased 22 percent (from 4.17 to to 5.08 million), thanks to a "liberalised immigration policy" after 2005.
During that period, there was a 46 percent spike (from 1,916 to 2,791) in total number of new TB cases notified in Singapore - with the proportion of foreigners increasing from 29 to 47 percent, as pointed out by Dr Chee and Dr Wang in last month's edition of Singapore Medical Journal.

What is the government saying?
"In 2010, the TB incidence rate among Singapore residents was 39.2 per 100,000, while that in non-residents was 42.1 (?). Non-residents accounted for 27 percent of TB cases reported in 2010, hence the majority were contributed by Singapore residents," pooh-poohed a Ministry of Health (MOH) spokesperson. In November 2011, MOH actually called a a press conference to correct a "misleading" press report that "a lot of our TB problems are from the foreigners."

Who do you believe?
As Clinton would put it, define "foreigners". The citizenship papers liberally handed out by the ICA merely change the statistical presentation, but the bacteria Mycobacterium tuberculosis (M. tuberculosis) remains politically insensitive. Tuberlin skin testing (PPD) for TB is but one method to ferret the carriers from high risk sources. It remains to be seen if the public health of Singaporeans rates prompt action from the pro-alien authorities. 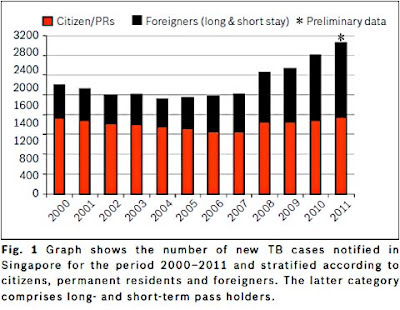