Her previous blog entry was dated 15 May, 2011, one week after celebrity Returning Officer Yam Ah Mee announced in his robotic monotone that Aljunied voters had decidedly returned the mandate to the Workers’ Party. The Chairman recalled one supporter had bellowed out: “I want to REPE-N-N-T-T-T”, which should tickle your funny bone.

Unlike the joker who flooded you with a tsunami of words, and a decades old graveyard will still be paved over for a new property development - you read that correctly, the pathetic road widening excuse was just a lame cover up - Sylvia Lim Swee Lian ( 林瑞莲) is one of those rare types who says what she means, and means what she say. No one can express her strength and conviction better than herself, unfettered of mainstream editorial bias: 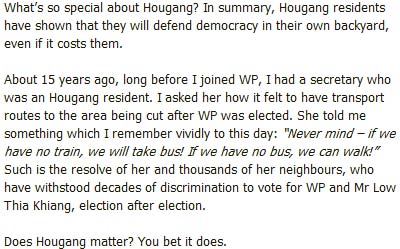