In Nov 2011, speaking at the HDB Professional Forum held at DB Hub Auditorium, HDB chief executive Cheong Koon Hean confirmed same, that it reduced flat sizes in the mid-1990s. What riled just about everybody was her perverse justification that household sizes in HDB flats had decreased from 4.6 people in the 1980s to 3.4, ergo the shrinking floor area. Thanks to Cheong, the average HDB flat will be not be a conducive nest to grow a larger family, and improve the total fertility rate. Oh, we forgot - the hidden agenda to import foreigners to dilute the Singaporean breed, people like the fictitious Deutsche Bank employee from the Philippines who pledged undying support for the PM on his Facebook wall ("Please remain as our leader for as long as you can. Only you sir can lead this nation to continued success").

If you buy Ms Cheong's line of argument, living space per person actually improved to 26 sq m to 32 sq m for four- and five-room flats in new projects - up from the 23 sq m to 27 sq m for the same types of flats built during the 1980s. 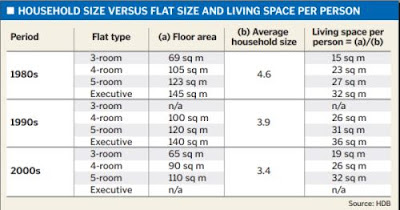 The only glitch is that it makes National Development Minister Khaw Boon Wan a liar. At the annual REACH Contributors' Forum on Wednesday night, he told a student from the National University of Singapore that HDB flats are not shrinking, contrary to popular belief. In fact, sizes of HDB flats have been the same for the past 15 years - 1997 onwards. The trick, you see, is selecting the timeline for the illusion of truth. If you go back further in time, back in the good old days of Lim Kim San, HDB flats were factually affordable. If you had $1,000 a month then, back in the 1980s, you would probably have snubbed HDB and gone straight into private property.

The Minister promised that Singapore will not go the way of Hong Kong, where flats are "far smaller". But would you buy a second hand car from a guy who once boasted he paid only $8 for open heart surgery? "In the past five years, the population was growing rapidly that infrastructure could not keep up so because of the temporary imbalance, prices shot up," Khaw explained, conveniently skipping the part where HDB joined in the feeding frenzy of the property developers to rip off those desperate for a simple roof over their heads. The average flat size may have shrunk by about 10 percent, but the prices have jumped more than 10 fold. The lies have also grown more audacious.
Posted by Tattler at 8:06 AM