Not Your Typical Case Of NIMB

It is important to highlight this instance of objecting to the building of an elderly centre has nothing to do with the not-in-my-backyard (NIMB) syndrome. The good folks at Jalan Batu are just cheesed off why the elected MP for Mountbatten didn't even know about the development at the void deck, and that there are more viable sites within the same vicinity. Such as: 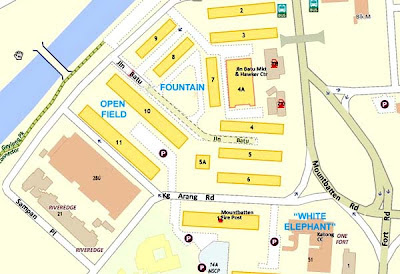 The void deck is a feature of HDB blocks as nobody wants to stay on the ground floor, the landing place for jettisoned litter originating from above. It has evolved into a focal point of community life, be it a Malay wedding or a Chinese wake. It's probably all Greek to MP Mr Lim Biow Chuan, but the resident of Block 11 says it best, "Our children play every day at our void deck. I feel so secure because when they play downstairs there are neighbours watching over them. They're not my race, they're not related to me, but the amount of bonding you have in the void deck cannot be found even in your own house." This is social integration in action, communal harmony at its finest hour.

Feigning ignorance (Lim: "I have absolutely no idea who authorised it") only made the gathered residents angrier, which drew jeers and the caustic rejoinder:"Without your consent, people are doing this. So, what are you doing?" Wait a minute, weren't Singaporeans supposed to be daft, and docile like sheep? MPs in white are supposed to be worshiped like gods, they alone can decide whether an estate turn into a slum. Something is in the air, the spirit of Hougang must be contagious.

Spoiler: Lim may remonstrate till he's blue in the face but, just like MP Sim Ann's "support" at Toh Yi, the final official response will be "the other alternative sites are not feasible as they are either too small, or have been set aside for other future development." ﻿
﻿ ﻿ ﻿
Posted by Tattler at 1:00 AM