According to Senior Lecturer (NUS Real Estate) and Director of Sustainable Asian Cities Malone-Lee Lai Choo, Singapore's built up land has a net density of 12,400 persons per square km, compared to Hong Kong's net density of 26,000 persons per sq km. Therefore, this expert thinks that there is room to increase built-up land to 70 per cent and for the population to grow to 6.5 million.

Like all talking eggheads, this baloney spouting Malone ignores the fact that Hong Kong has a hinterland to retreat to. Heck, most of their hardworking males probably have a 2nd, 3rd or 4th wife installed in Shenzhen or similar rural respite from the urban jungle. After a harrowing work in the city, they have a countryside to retire to for a healthy family life. If you are still looking for the Swiss standard of living promised, wake up. The other interesting data extract shows that lots of thriving countries are experiencing low population growth rates too. So why is Thailand, Switzerland and Japan not shipping in aliens by the plane loads? Obviously, GDP growth and productivity is fueled not only by sheer numbers - unless all the planners intend is a sprawling ghetto of sweat shops. 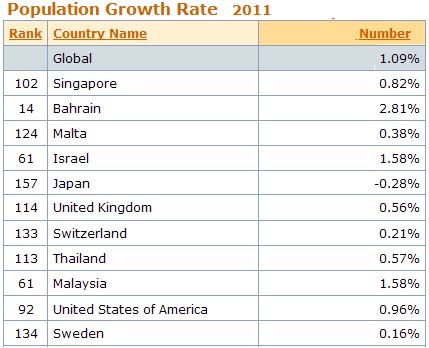 The Economist (21 April 2012, "China's Achilles heel")) touched on how China's one child policy, not unlike Singapore's stop-at-two, resulted in the total fertility rate falling from 2.6 over the past 30 years to 1.56. Another clear example of why social engineering in the hands of myopic bureaucrats is so dangerous. But the article also highlights that America is one of the rare examples where a country can utilise mass immigration to build a skilled labour force. And that's because America is an open society with a long history of immigration and strong legal and political institutions, and we might add, healthy respect for human rights. Dictatorships in the tropics trying to duplicate the formula produce only nation wide misery. They may dig up academics to justify their harebrained schemes, but the ugly results are plainly visible in our overloaded trains, cramped housing, precipitous wage gap, and growing social friction.
Posted by Tattler at 2:00 AM