The Truth About Goliath 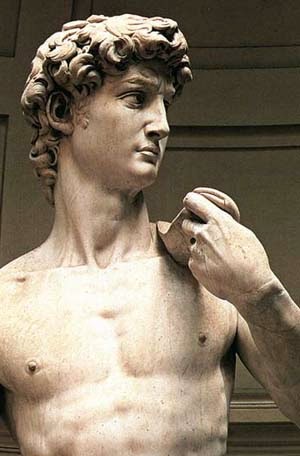 Malcolm Gladwell retells the classic underdog tale in a TED (Technology, Entertainment, Design) talk: David, a young shepherd boy armed only with a sling, beats Goliath, the mighty warrior. The story has transcended its biblical origins to become a common shorthand for improbable victory.

Gladwell suggests that Goliath was disadvantaged. His height was clue that he suffered from acromegaly, a form of gigantism with manifestations which include benign tumours, tall stature, and impaired vision. And probably a superego to match. Goliath never realised that David did not intend to engage him in hand to hand combat. All he had was a leather pouch attached to a cord, but Gladwell calculates that the stopping power of the rock projectile was equivalent to a bullet from a 45mm handgun. The lumbering Goliath, weighted down by heavy armour, never stood a chance. The bigger they come, the harder the fall. Gravity's a bitch.

Anyway, that's one view for the optimists. When a sledge hammer is let fly on a mosquito, it's difficult to root for the heavy weight.

When Michelangelo sculpted the statue of David, he broke with all traditional images. Instead of showing Goliath's defeat, Michelangelo chose to depict the young shepherd boy at the exact moment of decision. His look is of concern, but also of conviction. Goliath is nowhere to be seen.