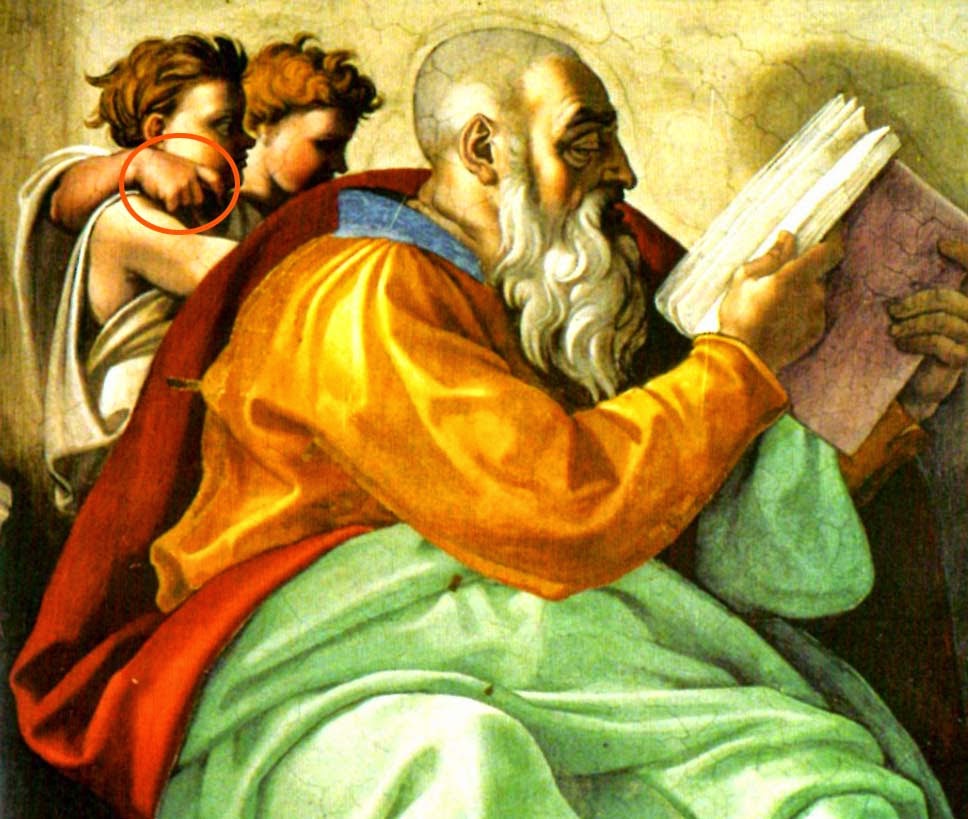 Look carefully and you'll see that the cherubic figure has made a fist with his thumb sticking out between his index and middle fingers. In medieval times and during the Renaissance period, it was called "making the fig". Now we know it as "giving someone the finger", or "flipping the bird". Michelangelo had superimposed a portrait of Pope Julius II over the prophet of Zachariah, and was merely expressing his true feeling toward his patron. To this day when a papal procession enters the portal of the Sistine Chapel, the pontiff passes right under a portrait of his predecessor getting the finger from Michelangelo.

Why would a prominent artist run the risk of incurring their patrons' ire? One reason offered by Rabbi Benjamin Blech ("The Sistine Secrets: Michelangelo's Forbidden Messages in the Heart of the Vatican", B. Blech & R. Doliner) was the righteous indignation of creative geniuses forced to humble themselves before the corrupt rich. In those times, artists were considered no more than artisans on call: well compensated but deprived of any freedom to refuse labors that they considered demeaning. Michelangelo would rather sculpt than indulge in "the two-dimensional falsity of painting". When the Sistine ceiling fresco was finally completed in 1512, he was wrecked with scoliosis, incipient rheumatism, respiratory problems, water retention and vision complaints. For a year afterwards, he could only read a letter by holding it high over his head, as if he were still painting the ceiling.

Instead of blatantly broadcasting his protestation like the graffiti at the Toa Payoh block, Michelangelo coded his outrage annd insults through secret symbols embedded in his artwork. Like artists of his time, he was not allowed to sign his handiwork, so Mike Cool is definitely not Michelangelo Buonarroti.