According to the table (see below) at the Central Provident Fund (CPF) website, the first CPF change was introduced on 1 Oct 2003, the cruel contribution cut to 33%. "The First Cut Is The Deepest" is also the title of a song by Rod Stewart, but nobody has the mood to sing after this.

And since the Prime Minister said, “People support CPF cuts because there are no protest outside parliament,” the CPF board got carried away with the implicit consent. CPF Minimum sum, salary ceiling, lower contribution rate for older workers, Medisave minimum sum, phasing of withdrawal rules, etc - the sky's the limit.

And the table does not include one more significant change - the erosion of CPF interest rate over the years. It was 5% in 1963, went up to 6.5% in 1974, and then the slide started heading south to current 2.5%. The formula for calculating the interest rate is a complicated business. From 1 July 1999 to present, the formula is supposedly 80% fixed deposit rate and 20% savings rate of the average of the major local banks over the preceding relevant 3 months. Problem with this method is that the banks have a different rate for someone depositing $100, and another with $100 million to park here. Just ask any wealth management executive.

Don't set your hopes too high up for the coming 7 June gathering of disgruntled voices at Hong Lim Park. Even the sympathetic members of parliament calling for higher rates and improvements to our CPF system will be met with same deaf ears. Technology makes it easy for the cold hearted, they simply switch off the hearing aid. Maybe what we need is a change of venue, say, outside parliament house. 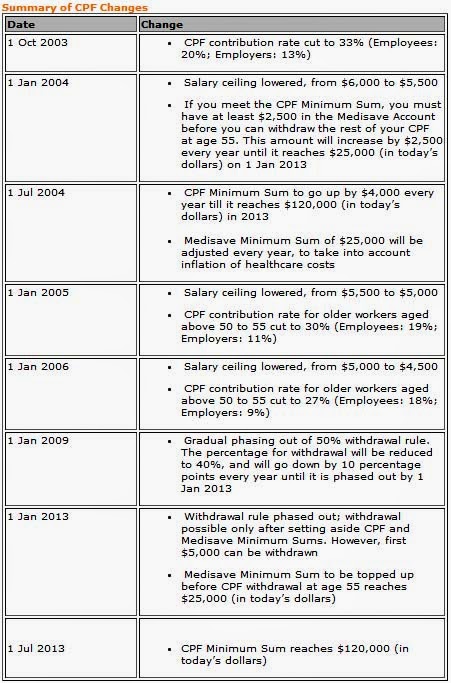