At its core, universal health coverage (UHC) is about giving the individual and his family access to health care and preventing them from facing financial ruin that can come from unexpected illness and disability. At least that was what Prussian chancellor Otto von Bismarck, widely credited as the intellectual father of today's UHC programmes, had in mind when he introduced national compulsory coverage for workers. Profit was never the motive.

Last year, Medishield premiums were quietly increased without much fanfare. Han Fook Kwang himself woke up to discover that his MediShield premium had jumped to $1,589, double what was deducted ($800) from his Medisave account previously. Before you could even contemplate bailing out of the scam, they introduced the compulsory Medishield Life to skim you off for perpetuity. 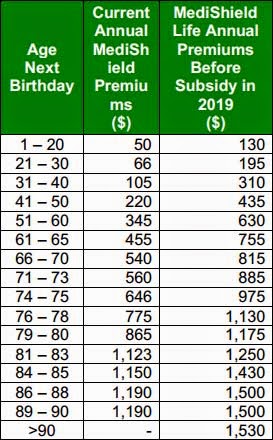 For a while now, the spiel was about additional benefits, never about whether we need them or are prepared to pay for the extras. They can hide the numbers only for so long. Now the secret is out.

As expected, leopards never change their spots. Medisave, one component of the Central Provident Fund (CPF), is also supposed to be our money, but that never stopped the grubby greedy hands from  helping themselves to the loot. Discounting the placebo of the subsidies, valid only for a temporal grace period, the numbers are higher than present (already inflated) Medishield premiums. The only important table is the set of before and after numbers.

Other than per capita household income, the determining factor for entitlement to a "discount" is the Annual Value (AV) of one's home. The retiree living in his old house with no source of income will still have to pay full rate. Ditto the sickly and handicapped, those in dire need of affordable medicare, will just have to downgrade to the void deck to qualify for a miserly handout.

The key to the grand scheme of things is the MediShield Life Review Committee (MLRC)'s suggestion  to work with private insurers to review the "landscape and features" of Integrated Shield Plans (IPs). You bet these private insurers, working in cahoots with the compliant Government appointees, will be laughing all the way to the bank. And you thought it was all about providing affordable health care. Bobby Chin, the Chairman of the MediShield Life Review Committee has even suggested that those who default on their premiums for MediShield Life should be penalised: "If you don't pay, the government will look into certain enforcement."

Speaking from the safety of several thousand miles away, the prime minister said, "You will have to pay somewhat more premiums but the premiums are affordable." Probably as affordable as those 35 year mortgages for a leasehold public housing unit.