Book Burning The Next Step 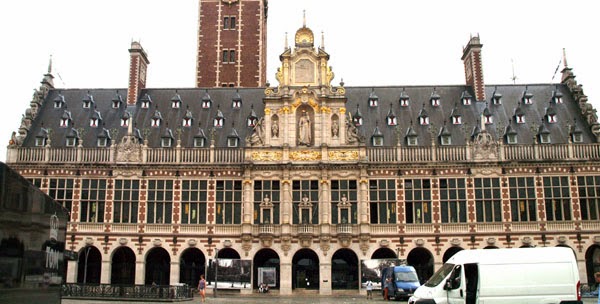 On August 25, 1914, the German army ravaged the city of Leuven, deliberately burning the university's library of 300,000 medieval books and manuscripts with gasoline. The first exhibits one sees on entering the KU Leuven library is the burnt out remains of priceless literature salvaged from the attempt to wipe out a cultural heritage. We didn't photograph the charred fragments, preserved painstakingly in plastic cases, because book burning has to be thing of the evil past, has no place in the modern day and age.

One parent in Singapore did organise a bonfire of assessment books after his kids cleared their final examinations. That was a pretty dumb thing to do, fire hazard and all, but nothing serious to be riled up about.

The National Library taking off books from the shelves because of one bigot's input is a different matter. It's a slippery slope from there to the conflagration of literary archives. In a literal sense, it's the next logical step from the minister's directorate to "read the right stuff".  The kind of move that makes a laughing stock out of Singapore, the equivalent of the ban of chewing gum. The joke that comes right after Singapore being a fine city. Makes you wonder why the millions are splurged on the F-1 night race or the youth olympics to put the little red dot on the world map. What we don't need is for neo-Nazis to create more adverse publicity, and throw more mud on our faces.