Written in her capacity as Director, Corporate and Marketing Communications, People’s Association (PA), Ooi Hui Mei's declared line in the sand is as divisive as it can get:
"...the Government has to appoint grassroots advisers who support its programmes and can play this role well. Opposition MPs cannot be expected to do this and thus cannot become advisers to GROs." 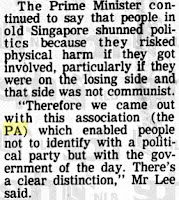 Before you even mouth "Says who?", be aware that under the PA Act, the Prime Minister is the Chairman. Yup, same fella who, for the third time running, appealed for the end of the polarisation that reared its ugly head in the watershed May elections. The younger set may not recall this, but way back in1983, Anson MP JB Jeyaratnam described being ‘treated like a leper’ by RC members, in spite of Lee Kuan Yew's assurance that "we came out with this association (the PA) which enabled people not to identify with a political party but with the government of the day."

When former PAP MP Cynthia Chua Phua chided Chen Show Mao for ‘politicising’ the case of losing out on an invite to a 7th month celebration, she inadvertently opened a Pandora's box. The perversion of a noble objective is now publicly exposed through a virulent exchange of letters to the press on the subject. The obvious question asked pointedly of one such letter: "If the PA and grassroots officers are blind to political affiliations, why are its appointed advisers exclusively from the PAP?"

The violence of China's subjugation of Tibet was a well kept secret until Romanian mountaineer Sergiu Matei released video footage of Chinese soldiers gunning down refugees making a bid for freedom through the Nangpa La glacial pass on September 30, 2006. Author Jonathan Green documents China's gross violation of Tibetan human rights in his "Murder In The High Himalaya" (PublicAffairs™ NY, 2010), when he and fellow climbers at Cho Oyu Mountain witnessed the brutal killing of a 17-year-old nun fleeing to Dharamsala. The book was his response to the moral dilemma: Would they reveal the atrocity to the world and lose the chance to climb in China again, or would they pass on by?

Not that the PA has resorted to gunfire - they wouldn't dare, trained NSmen can shoot back - but their attack on a publicly funded institution founded on just principles is an odium deserving of severe castigation. To the awakened citizenry, post GE 2011 and PE 2011, that line had better not be crossed.
Posted by Tattler at 5:25 PM