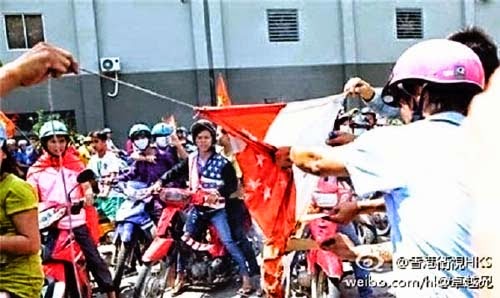 It looks like the Ministry of Foreign Affairs (MFA) is treating the www.weibo.com screen grab as genuine proof that our national flag was burnt by Vietnamese demonstrators on Tuesday.

Declaring the flag-burning at the Vietnam Singapore Industrial Park 1 as a serious incident, the irate MFA fumed: “The flag is a sacred national symbol and should be treated with respect ... The Singapore Embassy in Hanoi promptly conveyed our strong concerns over the flag-burning incident to the Vietnamese government on May 14 via a diplomatic note and also made representations to the Vietnamese Ministry of Foreign Affairs and Ministry of Public Security to ensure such an incident does not happen again.”

The Singapore flag was designed by a committee headed by then-Deputy Prime Minister Toh Chin Chye. He originally intended the flag's entire background to be red, but the Cabinet demurred on grounds that it might be misinterpreted as a rallying point for communism. In page 342 of "The Singapore Story: Memoirs of Lee Kuan Yew", Lee claims that the Chinese were influenced by the five yellow stars on the flag of Communist China, and wanted stars. The Malays wanted a crescent moon; red and white are their traditional colours for courage and purity. The five stars are supposed to represent  democracy, peace, progress, justice and inequality equality. Lee wrote that there had been much ado over the flag, as racial sentiments had to be respected.

Respect is now a distant memory. Nowadays, the 5 stars might just as well represent the India Indians, Filipinos, Burmese, Indonesians, and the Anton Casey/Mark Franklin type expatriates. With the boat shaped crescent representing the Singapore Sampan 2.0 floating hotel that provides housing, jobs and defence, latter courtesy of the National Service boys. The flag has been desecrated, but the Vietnamese are not the only ones to be blamed.