Surely You Are Not Afraid?

The perennial topic comes up each time elections are imminent. Theoretically, by matching the serial number on the ballot paper against the electoral roll number printed on the counterfoil, the polling agents (usually staff from the Ministry of Education) can easily trace how anyone has voted.

The practice of numbering ballot papers, inherited from the British system, is the achilles heel of the secret vote, latter being fundamental to the concept of a true democracy. The justification comes about when a voter arrives at the polling station only to find that someone pretending to be them has already cast a ballot. The bogus vote can, again theroretically, then be substituted by the genuine one.

During the run-up to the 2006 General Elections, Channel News Asia aired a programme “Why My Vote Matters” which featured a dialogue session between Minister Mentor Lee Kuan Yew and a selected panel of media executives born after 1965. Journalist Lee Chern Wen asked about SM Goh Chok Tong's election promise that if more than 60% voted for PAP, a certain constituency will get the upgrading. Her question to MM Lee, "How does the PAP know it's 60%? How can the residents not be fearful when you actually check into..." did not receive a convincing response. Lee's reply, "We can guess from our campaigning and our house to house visits, but we won't know who comprises that 60%," was met with Ken's famous repartee: "You don't need to know that to strike fear though". 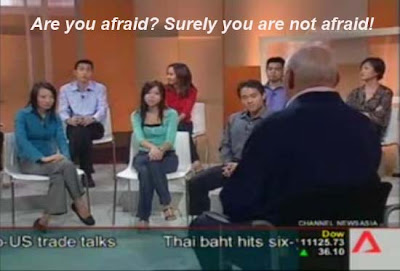 Everyone appreciates that the fact of whether someone has voted or not should be verified, to prevent impersonation or double-voting, but there should be no way to trace how anyone has voted. Maybe we should adopt the system of marking fingers with indelible ink, seen in Third World countries in the African continent. The ink plays a similar role for conducting fair and impartial elections to control fake voting.  Since quite a few Singaporeans are already feeling they are fast becoming Third Class citizens, it may be the most appropriate approach to a vexing problem.
Posted by Tattler at 9:01 PM