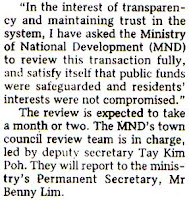 The Prime Minister has asked the Ministry of National Development (MND) to review the controversial sale of a publicly funded software to a private politically linked entity "in the interest of transparency". It would be awkward to call in the Corrupt Practices Investigation Bureau (CPIB) as a blogger has already been threatened with a law suit for alleging corruption. The Auditor General is probably too busy with the passing of batons from outgoing Mr Lim Soo Ping, 62, to incoming Mr Willie Tan Yoke Meng, 57.

MND was involved when parliament was told in 2008 that 8 Town Councils (TC) had used $16 million of their sinking funds to buy toxic financial products from Lehman Brothers. MND then was tasked to come up  with a report to assess TCs' management of estates and funds. The stupid report ended up as a whipping boy to make the opposition wards look bad. Well, maybe not so stupid, it also opened up the Pandora's box that is the AIM scandal. It remains to be seen if MND's deputy secretary Tay and permanent secretary Lim will come up with something better.

The Prime Minister pointed out that none of the external auditors raised the sale as an issue. Well,  Arthur Andersen also never raised their hands ("keechiu!") either when they were auditing Enron Corporation. Still, CEO Kenneth Lay was convicted of all 6 counts of securities and wire fraud. Enron had used special purpose entities (SPE) - limited partnerships or companies created to fulfill a temporary or specific purpose - which are found in Generally Accepted Accounting Principles (GAAP), the accounting industry's standards. According to McLean and Elkind in their book The Smartest Guys in the Room, "The Enron scandal grew out of a steady accumulation of habits and values and actions that began years before and finally spiraled out of control."

Enron's complex business model and unethical practices brought about its own downfall. A $2 company is a  perfectly legitimate business model, it's the moral hazard that is the critical issue at hand. Moral hazard occurs whenever a party with more information about its actions or intentions demonstrates a tendency or incentive to behave inappropriately from the perspective of the party with less information.