A Question Of Libel 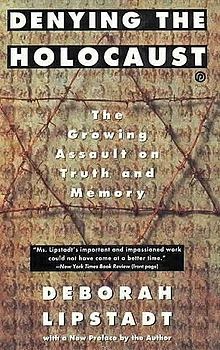 British historian and author David Irving specialises in the military and political history of World War II and believes the Holocaust never happened, just like some Japanese who think the Nanking Massacre never took place. When American academic Deborah Lipstadt called Irving a Holocaust denier, falsifier, and bigot in her book "Denying the Holocaust", he sued her and her publisher Penguin Books on 5 September 1996.

Although the book was first published in the United States in 1993, Irving decided to sue in an English court. And for good reason: English libel law puts the burden of proof on the defence.

Under American libel law, a public figure who claims to have been libelled must prove that the statements in question are defamatory, that they are false, and that they were made with actual malice. Furthermore, reliance on credible sources (even if they turn out to be false) is a valid defence. In contrast, English defamation law puts the burden of proving the truth of allegedly defamatory statements on the defendant, rather than the plaintiff. A defamatory statement is presumed to be false, unless the defendant can prove its truth, and reliance on sources is irrelevant. This has been considered an impediment to free speech in much of the developed world.

Lipstadt was intimidated by the lawsuit, since she was a humble professor of limited financial means. Irving is the author of some 30 books, including "The Destruction of Dresden" (1963), "Hitler's War" (1977), "Churchill's War" (1987), and "Goebbels: Mastermind of the Third Reich" (1996).

To cut a long story short, Irving not only lost the case, but in light of evidence presented at the trial a number of his works that had previously escaped serious scrutiny were brought to critical public examination.  Irving was shown to have misstated evidence; misquoted sources; falsified statistics; misconstrued information and bent historical evidence so that it conforms to his neo-fascist political agenda and ideological beliefs. The expenses arising from the court proceedings forced him into bankruptcy, and he lost his home.

Professor Lipstadt was fortunate in that many rallied to her cause when she was in dire need of support. Although gratified by the court ruling, she reminded us to be vigilant, "I do not delude myself that, though my battle with Mr Irving may be over, the fight against those who will pervert the historical record for their own political and ideological goals has ended". Especially those with the financial clout to unleash expensive litigation.