After Raymond's kids moved out to set up their own homes, he decided to downgrade from his landed property and move into a small condominium unit with his wife.  Maintaining his own house was getting to be quite a chore for his creaking bones. The extra money would make retirement a bit more pleasant, as it was tiresome being asset-rich and cash poor. Although he had no fixed income, the Annual Value (AV) of his property probably resulted in his receipt of $100 per annum for the 5-year Medisave Top-Up a.k.a. "Benefits from Budget 2014". That's less than $10 per month.

Lim was retrenched at age 58, and never managed to secure steady employment since. He decided to sell his 3-room flat and move in with his daughter as she has only one child, and there was an extra room. The proceeds from the sale should take care of the evening years for him and his homemaker wife. The son-in-law was never excited about Lim's retirement plans, and would express his unhappiness every so often. Since he is now asset-less, Lim was entitled to $200 for his 5-year Medisave Top-Up, plus his $250 (GST Voucher-Cash) and $250 (GST Voucher-Cash: Seniors' Bonus).

The irony is that Raymond had been a life-long supporter of the current regime, and had always been voting for the "correct" political party. A civil servant from first job to retirement, he felt short-changed. Lim was one of those embittered uncles who would rant to anyone within hearing range of his "kopi-tiam kakis". You would too, if your private sector career was ruined by a cheaper foreign talent import. Besides going on about the evils of GST, he is equally vocal about CPF Life and the Minimum Sum.

The Permanent Secretary (Finance)(Performance) who signed off the GST Voucher letter wrote:
"We hope that this letter has been written in a way that is clear to you. If not, please let us have suggestions on how to improve this letter at gstvoucher@cpf.gov.sg."

What is clear is that GST is still regressive, with or without the "permanent" GST rebates. One suggestion is to bring the letter to the smallest room in the house. First it is in front of you, then it is behind you, then flushed away with a copious amount of water. 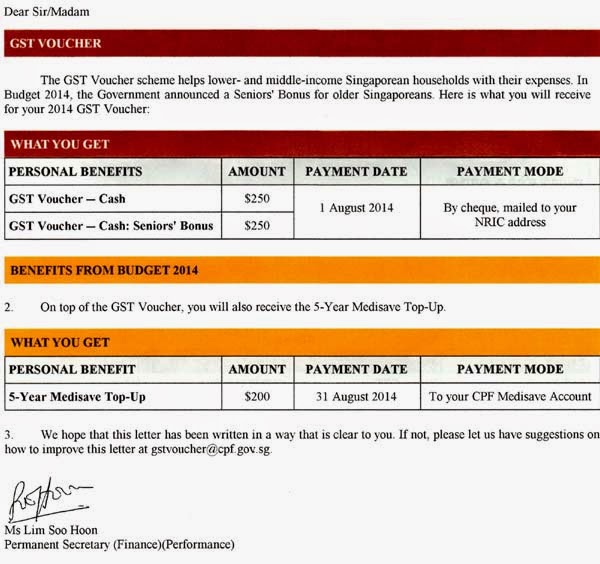