A participant at the TV "Live Forum" asked PM Lee Hsien Loong a simple question, if foreigners are integrating well into Singapore society. In typical evasive mode, Lee replied that the PAP regime is "controlling" the rate of influx of foreigners and "monitoring" how well they are integrating into local society. The fellow never gives a "yes" or "no" answer.

The kopitiam crowd knows it, Minister Mentor confirms it, the enclaves are already in place. The new arrivals are thumbing their noses at government initiatives to spread them out. MM minced no words: if they congregate, they buy second hand homes, resale homes and stick together, that will be a problem. Having said that, he concedes defeat, "But when the Indian immigrants buy condos in the East Coast, we can't stop them. So there will be a disproportionate number of North Indians among dwellers in the East Coast." Stories abound of Indian middle managers owning 2 or 3 units, hoping to flip them for a quick profit. So what happens if the property market takes a dive? "We'll just go back to India!" said one IT "specialist". The government which enforces integration with a heavy hand via the quota system in the HDB heartlands are giving up without a fight when it comes to the "high class" Indians.

The lesser mortals of local Indians speaking Tamil will have to contend with Little India, while uppity foreign Indian types will be conversing in Hindi at the up-market side of town. And never the twain shall meet. So much for social integration. If you still have doubts, listen to what MM said: "The Indians come from the north and even those from Tamil Nadu consider themselves superior to the Singaporean Indians. So again there's no mix."

And then there's this serious threat to social cohesion when super rich foreigners, the crowd the government is most eager to import, indulge in ostentatious displays of wealth. The water front homes at Sentosa Cove, the F1s races, all these were never meant for the homegrown Singaporeans struggling to cope with HDB loan payments. Still, MM wants to rein them in, he even has bosom pal Ong Beng Seng "trying hard to get more of the jetsetters to attend them F1".

How PM Lee can claim Singaporeans understand the "rational argument" for foreigners but not the "emotional buy-in" is beyond our comprehension. Perhaps he should provide real data how much tangible growth, for Singaporeans, was generated by these aliens - and we don't mean the spike in property prices. 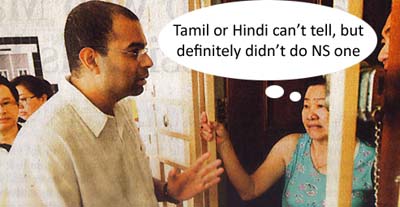