A Story Of Singapore 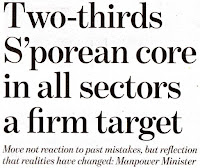 The story of Tanjong Pagar is the story of Singapore, so sang Chan Chun Sing. But when one reporter asked who will be taking over the horrible person's Tanjong Pagar division, the ex-major general said that will be decided after the election. The reticence is understandable, given that this is the season of the roaming hungry ghost, no one is prepared to walk in any dead man's shoes. Meanwhile, invoking his name in every political spiel seems to be the order of the day.

It is ironic that Tharman Shanmugaratnam should ask us not to judge politicians on their soundbites or soaring rhetoric, but on their "mundane, unexciting" contributions on the ground. He, who offered up the trampoline instead of a safety net for those who are falling through the cracks, knows too well the right word will immortalise or bury the speaker. Nobody wants this engraved on his or her tombstone:


"(For example,) you go to Peach Garden, you eat the S$10 XO Sauce chye tow kuay (fried carrot cake), you can be quite happy right? Because you are satisfied with the service and so on. On the other hand, you can go to a hawker centre, even if they charge you S$1.50, you might not want to eat it if the quality is not good."


We worry not about this type of entertaining contribution, but the "mundane, unexciting" policy making that is hell bent on ramming up the population target to 6.9 million and beyond. The taciturn Liu Thai Ker is even more tenacious, "Forget seven million. Think ten million people, if you want this city-state to succeed."

Like the parable of the frog in the simmering kettle whose survival instincts are geared only towards detecting sudden changes, Singaporeans only woke up when foreigners have snapped up their houses, jobs, and seats on the public transportation system. A few years back, when Mah Bow Tan was still minister, a well connected civil servant expressed surprise that Mah unwittingly exposed the (then) 5 million population target. It was their closely guarded secret. Yesterday Lim Swee Say revealed another well kept secret: two-thirds Singaporean core a firm target.

One who was intimately involved in quietly turning up the heat is Sim Ann, who worked in the National Population and Talent Division (NPTD)  under the Home Affairs minister. You won't find her name in the unsigned Population White Paper (PWP). Given the mike at a dialogue organised by the National University of Singapore Society, she shredded her unexciting persona to take a vicious bite, casting aspersions about money lost in accounting lapses ("But in the case of AHPETC, I’m not too sure,”):
“I wish that more answers had been forthcoming from AHPETC. Then I think we would have wasted much less time on the issue and I think the population would be much the wiser.”

For folks who profess preference for "mundane, unexciting" undertakings, that has to be stirring up an hornets' nest. The population is much the wiser, and the incumbents face a Herculean task in attempting to stuff the rot back into Pandora's box.