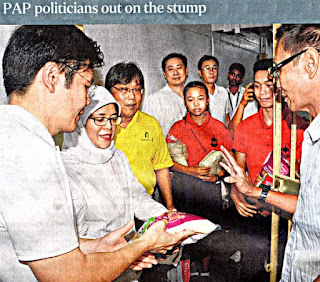 The Speaker of the House is an important appointment, the second most powerful after the prime minister. Halimah Jacob has no excuse not to know the rules and regulations. Although she outranks the President, that doesn't mean she can start campaigning for votes before a writ of election addressed to the returning officer has been issued:


The packet of rice she's caught handling out to residents in rental flats at Marsiling Road may not be haram, but pork barrel politics definitely is. With or without a SG50 sticker.

Problem is, the tudung clad member tends to make her own rules. Nominated Member of Parliament (NMP) Eugene Tan thought he was just doing his job when he pointed out to the Speaker in the nick of time that quorum was not met when two bills were about to be passed in parliament. Leader of the House Ng Eng Hen managed to save the day by asking for an adjournment instead of summoning the MPs back into the Chamber.

Tan had made it well known - online, offline and maybe kopi-tiam circuit - that he was seeking another term as NMP. He was not chosen. Chairman of the Special Select Committee of Parliament Halimah Yacob explained:


"We looked for eligible candidates who had distinguished themselves through their contributions to society or to their respective field, and who could bring their specialised knowledge to add to the depth and breadth of debates in Parliament."


Future generation leader hopeful Lawrence Wong is not about to distinguish himself by saying anything to make her look "malu" (Malay for saving her half covered face). In the immortal words of Robin Williams in "Good Morning Vietnam", "This will not look good on my resume."