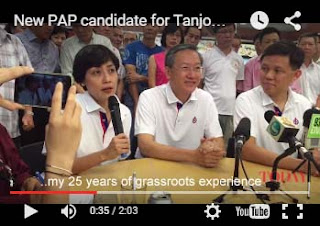 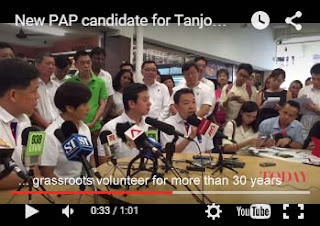 It's the kind of one upmanship that is best suited for a men's locker room. Seriously, comparing lengths at a public kopi-tiam?

Former public servant Joan Pereira started it off by boasting about her record length of grassroots service: "My 25 years of grassroots experience has impressed on me the importance of anticipating and meeting needs of residents."

What she did not anticipate was the delicate ego of her male colleague, who countered with "police officer for 20 years, grassroots volunteer for 30 years." Born in the 1970s, that would make Melvin Yong the youngest political activist at age 13. Pereira started official party work in May, she has been seen walking the ground with Indranee Rajah since last year. When it comes to political truths, the mileage will vary.

Even the mainstream media contributed, writing that Yong's last day of work with the Police was on Sunday, Aug 16, a public holiday. Unfortunately for the hard working Assistant Commissioner of Police, Yong was spotted at Tanjong Pagar GRC mingling with residents at a walkabout organised by the People's Action Party (PAP). Which is in blatant breach of the Code of Conduct published by the Public Service Division (PSD) to remind civil servants they should be “completely neutral in all political matters and matters of public controversy".

Forget about filing a police report. Parts of Tanjong Pagar GRC came under his watch as Commander of Clementi Police Division from 2010 to 2014. His band of brothers in that ward will ship you so fast to the Institute of Mental Health for a medical review that you won't know what hit you.