The Interview That Never Was 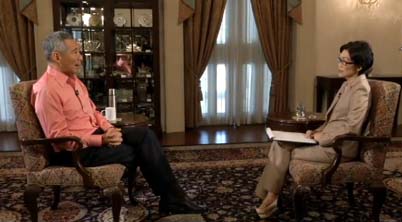 When the camera started rolling as the two walked towards their places for the televised "A Conversation with the PM: Our Future, Our People" interview, Lee was heard saying to Ambassador-at-Large Chan Heng Chee, "Thank you for doing this." Doing what? If this was a conspiracy, how come we didn't get the memo?

Netizens who bothered to sit through the entire programme noted that it ended without any scrolling credits. Whoever produced it, directed it, scripted it, provided the lighting or sound, mysteriously decided to be anonymous. No sign of the MediaCorp or CNA logo either.

Without a doubt, the topic of discussion was about foreign worker intake. Singaporeans first woke up to the problem when a dormitory sprung up overnight at Serangoon Gardens. The residents were castigated for being selfish and ungrateful wretches, and we were told the aliens in our midst were transition workers, going home when the housing blocks have been constructed. Then commuters started to notice more strange faces on the trains, and even Anton Casey bitched about the olfactory pollution. The last straw was when middle management jobs were lost to the new comers - that many of these came with fake degrees was a discovery yet to be unveiled. The excuse used for damage control? It's a competitive world out there, and the spurs that need to be dug into behinds apply to the job market too. Too bad if the Singapore core is diluted with rogue elements, and the fragile identity ethos is being torn apart with new divisive entrants. Yang Yin was an officially credited member of the Integration and Naturalisation Champion (INC) committee in Intan Mokhtar's ward.

When Prof Chan presented him with a yes-no question ("Now with the curb on immigration flow, Prime Minister, have you won more support from people, compared to the angst of the PMETs and SMEs?), Lee went into classic evasive mode, a rehash of the "please bear with us, we are trying our best on your behalf" verbiage last heard at Boat Quay during GE 2011:


"And you may agree with it, you may not agree with it, but I can tell you in complete honesty that I am trying my best to do this on your behalf. And I cannot avoid doing this because otherwise I think I will be letting you down."


That's a clear reminder right there that a nation has been let down. And a hint that the whole televised charade was an apology-in-advance. It has to be too humiliating to bow and scrape twice in one life time.