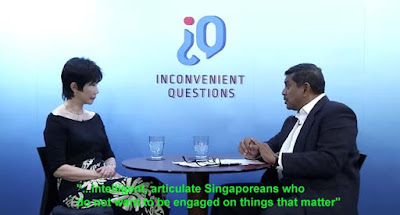 Everybody knows Meg Ryan was faking it in "When Sally Met Harry". But there's nothing fake about the frank exchange of views in this Inconvenient Questions video . Viswa Sadasivan, a veteran news and current affairs presenter and former Nominated Member of the Singapore Parliament, was really upset when he asked Catherine about people who are capable of engaging the government for the greater good of Singapore but abdicating the responsibility (at 16:42 or thereabouts).

He calls it "intellectual hypocrisy". Not willing to go out on a limb but wanting others to fight the battle. Even for the doyenne of Singapore writers, that choice of phrase was a very strong outburst. Her own anecdote was about a "highly educated" friend who said she had to vote for the ruling party because her son-in-law was due for a promotion. Her prognosis is that the "very compliant" older generation is about to be replaced by a more vocal young. It is no longer convenient to hide behind the veneer of fear.

Only a few know that the bogey of the serialised ballot paper was invented by the Barisan Socialis, who tried to frighten the masses from voting in the "rigged" referendum of 1 September 1962. Unfortunately for them, spoilt/blank votes were counted as Option A - actually all the three options, A, B or C, were for merger. The self censorship is still working, and the incumbents are still benefiting from the unwarranted fears.

The orgasmic moment in the interesting dialogue is not the mention about Amos Yee being interviewed by CNN last week (not BBC). Near the end, time for broaching the inconvenient question, the author is asked if Singapore is ready for a non-Chinese prime minister. Citing "the sincerity that gets across", Tharman gets her full hearted and full throated endorsement. Okay, that should explain why the present one is still fighting hard "to earn your trust and support."